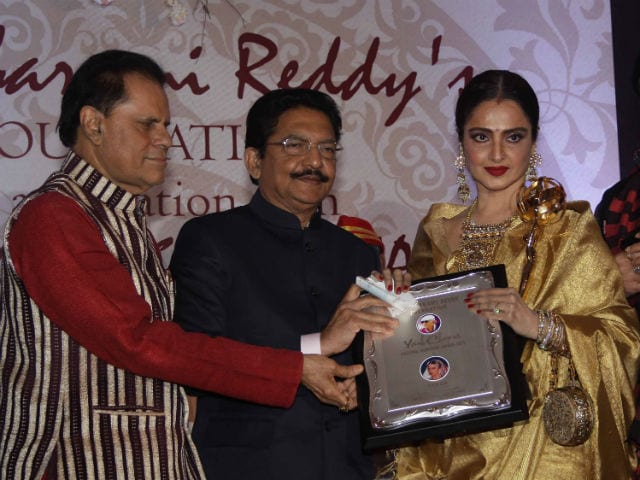 Mumbai: Veteran actress Rekha received the Yash Chopra Memorial Award on January 25 in Mumbai for her contribution to the film industry.

The award has been instituted by the TSR Foundation of T Subbarami Reddy in the memory of the Mr Chopra, who died in 2012.

"I am honoured to be bestowed with this award in Yash ji's memory. Yash ji taught me how to love and I am eternally grateful for the memories & films that I have had the privilege to be a part of. I can only say that this is not the climax. This is the best phase of my life and there is a lot more to come. What I have learnt from Yashji is that if you love someone, then you should love with all your heart, so that there is no scope of loving anything else," said Rekha.

The Foundation annually honours a distinguished senior film personality for outstanding contribution to film industry with a Gold Medal and a cash prize of Rs 10 lakh.

Lata Mangeshkar and Amitabh Bachchan have received this award previously.

The jury comprised Pamela Chopra, Simi Garewal, Boney Kapoor, Jayaprada, Pinki Reddy and Reddy himself as its Chairman and they unanimously decided that the 3rd Award should go to Padma Shri Rekha Ganesan.