In Raja The Great, Ravi Teja will be seen portraying the role of blind and trained fighter 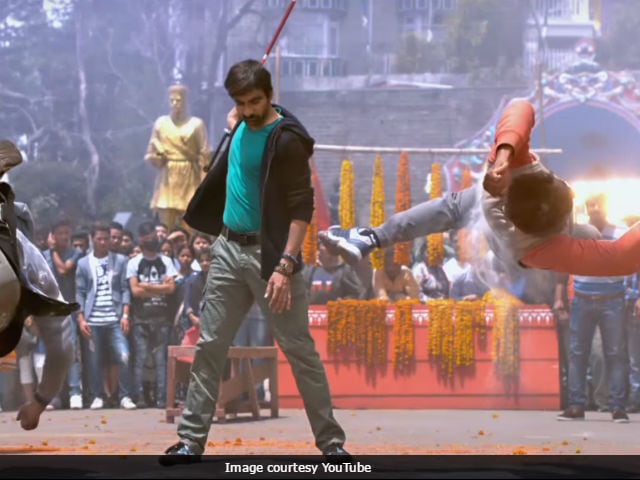 Ravi Teja in Raja The Great

New Delhi: The teaser of Ravi Teja's forthcoming film Raja The Great has been unveiled by the makers of the film on the occasion of Independence Day and the audience is loving it. In the film, the 49-year-old actor will be seen portraying the role of blind and trained fighter. However, the one-minute teaser shows that Raja (Ravi Teja) doesn't consider being blind as a disability and even fight bad guys. At the end of the teaser, Raja says, "I am blind but I am trained." Raja, 'the great' is seen practicing martial arts and playing kabaddi in the film which seems to be packed with fabulous action-packed scenes.

Watch the teaser of Ravi Teja's Raja The Great here:


Raja The Great has been written and directed by Anil Ravipudi. The film also stars Mehreen Pirzada, Radhika Sarath Kumar and Prakash Raj in pivotal roles.

Raja The Great will be produced by Dil Raju under the banner of Sri Venkateswara Creations.

Raja The Great will release in theatres on October 13.

Ravi Teja is one of the most popular actors of Telugu cinema and he has featured in over 60 movies.

Ravi Teja began his career as a supporting artist in 1990 movie Karthavyam. He later featured in small roles in films like Chaitanya, Aaj Ka Goonda Raj, Allari Priyudu and Sindhooram.

Ravi Teja got to play the lead role in 1999 movie Nee Kosam, which received the Nandi Special Jury Award.

Promoted
Listen to the latest songs, only on JioSaavn.com
Ravi Teja was last seen in 2015 movie Bengal Tiger, directed by Sampath Nandi. The film also starred Tamannaah and Raashi Khanna in lead roles.

Ravi Teja will next be seen in Touch Chesi Chudu, which is scheduled for release on August 21.