Raveena's fun video on Instagram is a huge hit with fans and colleagues. 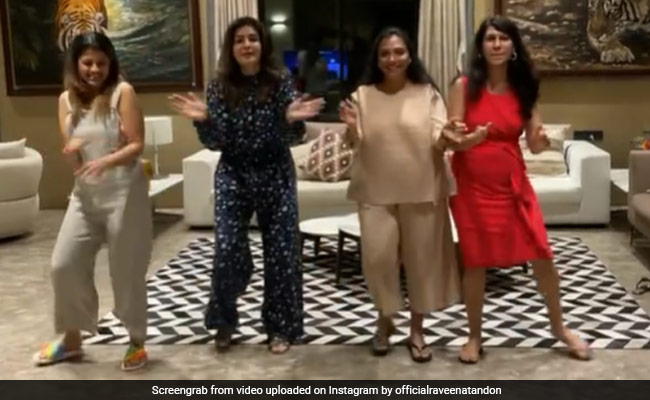 Remember all the fun night-ins with your girl pals where you broke out into dance routines and laughed till your stomach hurt. Well, it looks like Raveen Tandon is just like the rest of us when she is surrounded by her best friends. Raveen Tandon, one of the most successful Indian actresses of the '90s, shared a fun and candid video of herself with her girl gang. In the clip, the actress is seen grooving to the song Iko Iko (My Bestie) with her friends. The four stunning women dish out an apparently well-rehearsed routine between peals of laughter. Sharing the video, Raveena wrote, "Weekend fun with the besties," and tagged her friends.

Like us, the actress' fans and colleagues seemed to have enjoyed the dance moves and the warm camaraderie exhibited by the four friends. Reacting to the video, choreographer Farah Khan Kunder said, "Sooo cute this is." Several fans left heart and fire emojis to describe just how much they loved seeing Raveena's inhibited and fun avatar.

Instagram users are in love with Raveena Tandon's social media game thanks to how honest and raw the actress is, in her posts. Recently, the actress shared a throwback photo of herself lounging at an airport, with a cup of tea or coffee in her hand. In the caption, she expressed just how much she missed travelling. The actress wrote, "When travelling was so so usual! And waiting to fly again."

The actress has only recently returned from a trip to Bandhavgarh National Park of Madhya Pradesh with her family. She has shared several pictures from the vacation and spoken about the importance of spending time with nature.

Sharing one such experience from the trip, Raveena Tandon wrote, "Watching the early morning sun at the camp for breakfast. At a distance, the Chital's (spotted deer) alarm calls warn you of a predator in sight, you wait, patience is the name of the game. And then out of nowhere, they walk into your sight, you are irrelevant, mere mortal, in the eyes of royalty .. their pace, their terms, Their Forest."

Take a look at some of the other photos here:

Raveena Tandon made her debut with the film Patthar Ke Phool. She is married to film distributor Anil Thadani. Raveena will be seen next in the film KGF: Chapter 2 featuring Yash and Sanjay Dutt.