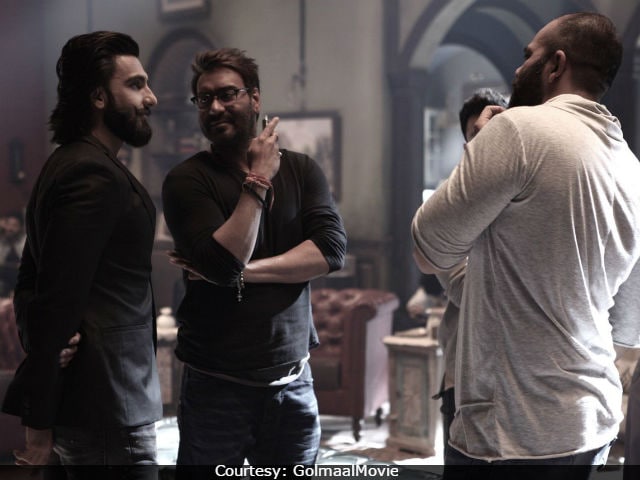 New Delhi: Actor Ranveer Singh, who is currently shooting for Sanjay Leela Bhansali's period drama Padmavati took off time to visit Ajay Devgn and Rohit Shetty on the sets of their film Golmaal Again. The pictures were shared on Twitter by an unverified account purporting to be the official handle of the film. The caption reads: "Look who came visiting on the sets of #GolmaalAgain!" "Ranveer was shooting a commercial in the same studio and when he learnt that Rohit and Ajay (Devgn) were shooting on the premises, he strolled across to meet them. The trio spent half an hour chatting. Parineeti Chopra who'd worked with Ranveer earlier in Kill Dil also joined them. They spoke about Golmaal Again and comedies in general, a genre Ranveer likes," indianexpress.com quoted a source as saying.

Look who came visiting on the sets of #GolmaalAgain! @RanveerOfficial@ajaydevgn#RohitShettypic.twitter.com/MeoXIAE49S

Last week, Ajay Devgn via a tweet revealed the entire cast of the film. Wishing Rohit Shetty on his 43rd birthday, the Shivaay actor posted a photo of his 'Golmaal family.'

Birthdays should be mad fun and glorious...a lot like our Golmaal family. Happy Birthday Rohit! pic.twitter.com/ZmXH5mR3Cx

Promoted
Listen to the latest songs, only on JioSaavn.com
Golmaal Again is the fourth instalment of Rohit Shetty's blockbuster comedy series that began with Golmaal: Fun Unlimited in 2006. The original cast Ajay Devgn, Arshad Warsi, Tusshar Kapoor, Shreyas Talpade and Kunal Kemmu have been joined by Tabu, Parineeti Chopra and Neil Nitin Mukesh. The shooting of the film began earlier in March.

Kareena Kapoor Khan, who is currently on maternity leave, featured in the second and third films of the series. Golmaal Again comes seven years after Golmaal 3 released. The Golmaal films have been hugely successful at the box office. Golmaal Again is expected to release on Diwali this year.