"It was a cute moment," said Ranveer Singh 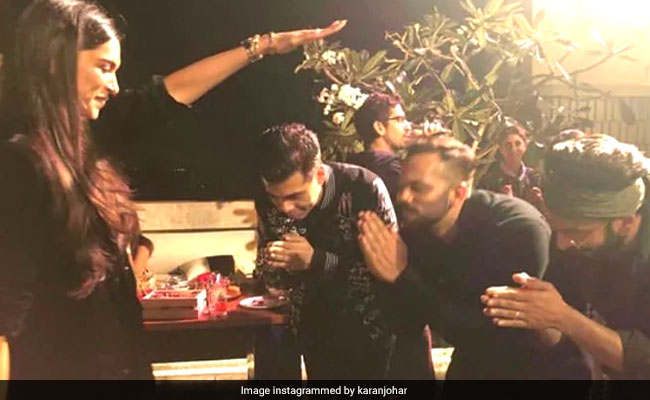 Remember the photo of Deepika Padukone blessing Ranveer Singh, Karan Johar and Rohit Shetty at the Simmba success bash, that went crazy, crazy viral? Well, Ranveer Singh shared the story behind the epic shot in an interview with Pinkvilla. The party was hosted at Karan Johar's residence, whose Dharma Productions bankrolled Simmba, on the day Simmbaturned out to be the third-highest earning film of 2018. Simmba, which has also become one of Ranveer's biggest grossing film, is his first release after his wedding to Deepika Padukone, who was termed as the "Laxmi" in his life at the party, Ranveer revealed. "It was a cute moment," said Ranveer.

Speaking to Pinkvilla during the interview, the 33-year-old actor said: "I think there was some conversation about 'teri toh nikal padi, kya good luck hai, Laxmi ghar aayi hai'. So, we were like 'Laxmi ki blessings lo', so she did that (gestures) and we did this and it was a cute moment."

Here's what Karan Johar had shared on his Instagram story.

But it's not just Deepika who had the limelight at the Simmba success bash. Trust Ranveer also to steal the show. He danced to Jumma Chumma, Aankh Maare and Zingaat and we absolutely love inside videos of them.

The success party was also attended by Sara Ali Khan, Sonu Sood, Ajay Devgn, Kajol, Akshay Kumar along with other actors from Simmba. The film marks Ranveer Singh's first project with Rohit Shetty, who marked his eighth 100-crore film with Simmba. Ranveer is currently busy with the promotions of his next film Gully Boy.