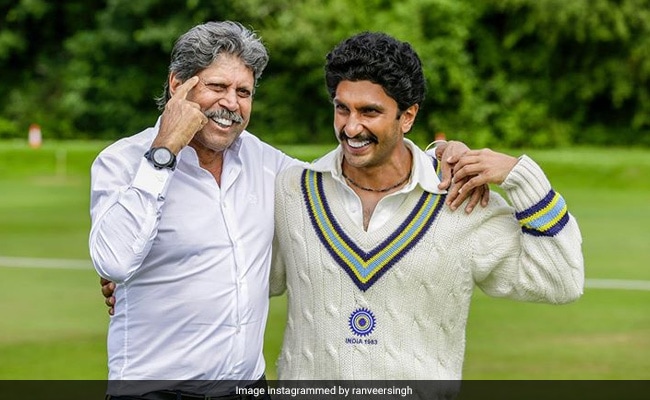 Ranveer Singh made cricket icon Kapil Dev's birthday a memorable one with a special birthday wish on Instagram: "Happy Birthday, legend! Thank you for showing us the way. You made us proud. Now it's our turn," he wrote. Ranveer Singh has been cast as Kapil Dev in Kabir Khan's sports drama '83, which tracks the story of India's historic World Cup win in 1983 under the captaincy of Kapil Dev. Deepika Padukone plays the role of Kapil Dev's wife Romi Bhatia in the movie, which marks her first film with Ranveer after they got married.

Ranveer Singh's birthday wish for Kapil Dev came in the form of three photos from what appears to be '83 sets.

Ranveer Singh released his first look from '83 on his birthday last year, sending fans into a tizzy for his amazing transformation into a younger Kapil Dev. "On my special day, here's presenting the Haryana hurricane, Kapil Dev," he had written.

Earlier, Kapil Dev had given a massive shout out to Ranveer Singh with "The past with the present" post.

The past with the present

Ranveer Singh trained with Kapil Dev on the film's sets in Dharamshala and also spent some time with him at his residence to further perfect his character. Speaking to news agency IANS earlier, Ranveer had said: "I think what I gained from Kapil sir has been invaluable. There is no other way I'd do it. I am very fortunate, privileged and honoured that he welcomed me into his home. He was warm, welcoming and forthcoming. Everything I gained from him during those days is going to be invaluable for the construction of my performance," he added.