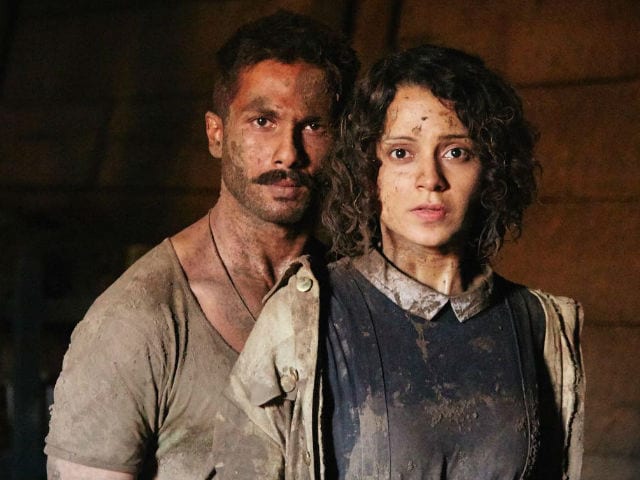 New Delhi: Bollywood's latest offering Rangoon, starring Kangana Ranaut, Shahid Kapoor and Saif Ali Khan, is not making much noise at the box office. The film directed by Vishal Bhardwaj released on Friday and since then has made a little above Rs 14 crore, according to a report in Box Office India. Collection-wise Rangoon mirrors the box office journey of 2016 films like Sanam Re, Raaz Reboot and Kyaa Kool Hain Hum 3, says Box Office India. However, the period film opened to rave reviews on February 24 and film critics lauded Kangana's performance in the film set during World War II.

Rangoon is a love story set during the World War II. Kangana Ranaut stars as actress Miss Julia who is sent to Burma for a gig by her producer (also her boyfriend) Rustom Billimoria (played by Saif Ali Khan). A soldier Nawab Malik (Shahid Kapoor) is entrusted with Miss Julia's security and after a rocky start they fall in love.

Promoted
Listen to the latest songs, only on JioSaavn.com
Rangoon is Kangana's first film with Vishal Bhardwaj while Shahid made Haider and Kaminey with the director. Saif Ali Khan featured in Vishal Bhardwaj Omkara.

Kangana's Rangoon duties are now over and the actress will get busy Hansal Mehta's Simran and Ketan Mehtra's Rani Lakshmi Bai.