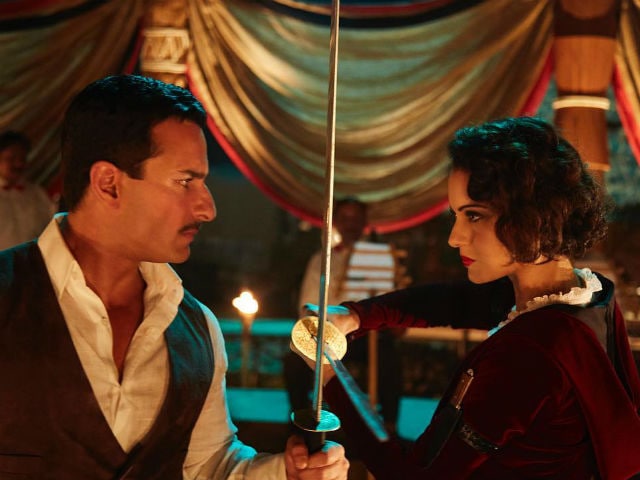 Kangana Ranaut stars as a filmstar in Rangoon

New Delhi: Kangana Ranaut, Shahid Kapoor and Saif Ali Khan's Rangoon opened to fabulous for the lead stars by Bollywood. However, the Vishal Bhardwaj-directed war drama seems to have failed to leave an impression at the box office. Rangoon could not get any growth on Saturday as collections were similar to Friday, reported Box Office India. The report suggested that the film made Rs 5 crore on Saturday, as compared to Rs 5.08 crore on Day 1. Trade analyst Taran Adarsh said that Rangoon has a 'dismal' start. Kangana Ranaut and Shahid Kapoor promoted the film on a wider scale with their interviews and appearance on various reality shows. According to Box Office India, the film's current total stands at Rs 10.06 crore approximately.

Rangoon is a story of love and deceit set in the times of World War II. Kangana stars as Miss Julia, a 1940's filmstar. Saif plays her lover and producer Rustom Billimoria while Shahid features as Nawab Malik, a soldier entrusted with Miss Julia's safety.

Promoted
Listen to the latest songs, only on JioSaavn.com
In his review for NDTV Movies, Saibal Chaterjee wrote that Rangoon is a sweeping tale of love, jealousy and valour located ambitiously, and largely effectively, at a fictional intersection of war, history and generic movie conventions, Rangoon employs a lush and evocative colour palette to recreate an era of strife and rebellion. He applauded Kangana's role and wrote, "The performances are first-rate, with Kangana pulling off an act that demands daunting versatility."

Rangoon is Kangana Ranaut's first film with Vishal Bharadwaj while Saif is working with him for the second time and Shahid for the third film. Rangoon also stars Richard McCabe and Satoru Kawaguchi.