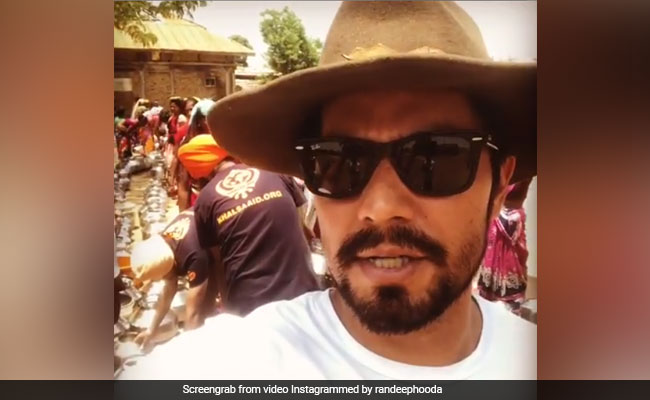 Actor Randeep Hooda joined a team of volunteers to help people who are reeling under the effect of drought in a village near Nashik (Maharashtra). According to the Drought Early Warning System (DEWS), about 42 per cent of India is 'abnormally dry' which is around 6 per cent more than last year. Maharashtra is among some of the worst affected areas, apart from Telangana, Andhra Pradesh, Karnataka, Gujarat and Rajasthan. Randeep, along with UK-based international humanitarian relief organisation Khalsa Aid, recently visited drought hit Vele village to provide drinking water to the people. The Highway actor took to his social media and shared a video in which he is seen urging the government to "find permanent solutions" for the drought victims.

"I am in village Vele (near Nashik). There is a great shortage of water, especially drinking water... All wells have dried up. This is a serious problem every summer. This area gets hit by drought. Khalsa Aid team is here, volunteers are doing great ground work here by providing 25 to 30 water tankers everyday. I urge the government to step in and help these people and find some permanent solutions. A lot of dams are here, but people do not have access to it," Randeep said in the video he posted on his Instagram profile.

There is a major shortage of water all over the country.. in #Maharashtra near #Nashik village #Vele with @khalsaaid_india volunteers trying to do our bit #EveryDropCounts be as prudent as you can @khalsa_aid #SaveWater @narendramodi @amarpreetsingh_ka @ravisinghka

In the video, volunteers can be seen providing water to the villagers and helping them fill containers. This was not the first time Randeep had joined the group. He has been part of many Khalsa Aid missions including the cleaning of Juhu beach after the Ganpati Visarjan in 2017 and serving food to flood victims in Kerala last year.

Water scarcity and environment conservation are subjects that various members of the film industry often talk about, and feel the need to spread awareness about.

Filmmaker Shekhar Kapur, who wanted to make a film titled Paani, often tweets about saving water, keeping water bodies clean and eradicating the use of plastic. There's also Dia Mirza, Bollywood's eco-warrior, who asserts the importance of a clean and green planet.

Actor-producer Aamir Khan and his wife Kiran Rao also run Paani Foundation, a not-for-profit set up in 2016 to fight drought in rural Maharashtra.