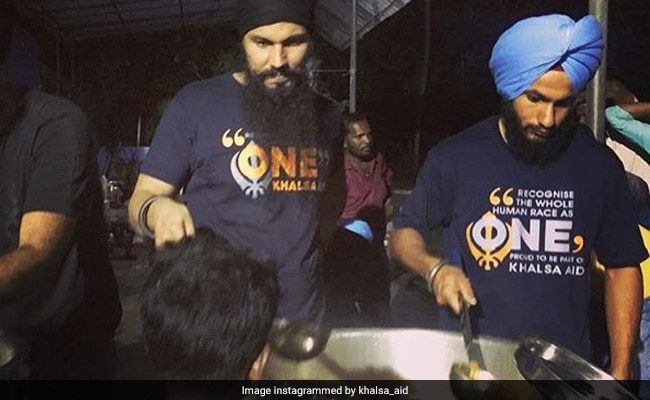 Actor Randeep Hooda is helping the people in flood-hit Kerala from ground zero. The actor has joined the members of Khalsa Aid team, who are providing amenities to the ones affected by the flood. The official handle of the Khalsa aid has shared a photo of Randeep Hooda serving food and captioned the photo: "Bollywood actor Randeep Hooda joins the Khalsa Aid team in Kerala ! It's great to see celebrities on the ground and not just simply commenting on social media." Many other Bollywood celebrities have also provided help to the people affected by the flood and urged fans and followers to do the same.

Sushant Singh Rajput trended big time for donating Rs 1 crore to the Chief Minister's Relief Fund for flood-hit Kerala. Sushant has donated the money on behalf of a fan who had tagged the actor in a comment. Sushant shared a screenshot of the amount contributed on his Instagram timeline and wrote: ""As promised, my friend, @subhamranjan66, what you wanted to do, has been done. You made me do this, so be extremely proud of yourself. You delivered exactly when it was needed. Lots and lots of love. Fly. Cheers," Sushant captioned his post, adding the hashtag, 'My Kerala.'

As promised my friend, @subhamranjan66 , what you wanted to do has been done. You made me do this, so be extremely proud of yourself. You delivered exactly when it was needed. Lots and lots of love. FLY Cheers #MyKerala

Earlier, Kunal Kapoor raised an amount close to Rs 1.5 crore through his crowdfunding website Ketto. The amount collected will be used to rehabilitate the people affected by the flood in Kerala.

Thank you for helping us raise over One Crore to help NGO's and organisations that are working tirelessly in trying to rescue and rehabilitate people. There is still an urgent urgent need for food, medical and basic supplies. Pls continue the support, spread the word. We all need to get together and collectively make a difference. Every contribution at this point will go a long way! Please visit keralafloods.ketto.org Repost @varantonio with @get_repost @kettoindia KERALAFLOODS.KETTO.ORG

Malayalam actor Rajeev Pillai postponed his wedding to help rescue people of Nannoor, his hometown. Actress Richa Chadha, who co-stars with the actor in an upcoming film Shakaeela, revealed his story on Instgram.

My friend and costar in #Shakeela , @rajeev_govinda_pillai postponed his wedding, which was to happen three days ago, in order to help out in rescue efforts in his hometown of Nannoor , Kerala. They made rafts, carried boats by road to the low lying areas, made good use of all the muscle. Bravo! PS- apart from obvious resourceful-ness, helpfulness, I think this is when fitness comes in handy. When you're strong, agile, you can be of use in adverse conditions. The young men and the fishermen in this town worked till late in the night to save people from the rising water.

Esha Gupta, Dino Morea, Sonal Chauhan and Ali Fazal are among others, who urged fans to help people of Kerala through their post on social media.