In the family photo shared by Riddhima, Ranbir Kapoor can be seen posing with girlfriend Alia Bhatt and mom Neetu Kapoor. 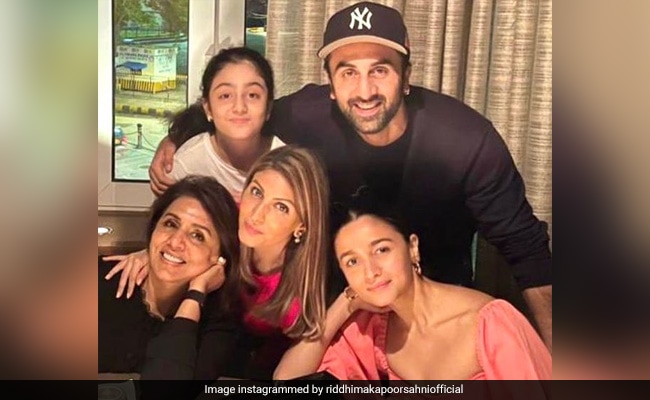 Happy Birthday, Ranbir Kapoor. The Rockstar actor turned a year older today but his sister Riddhima Kapoor Sahni thinks age is just a number. With each passing year, Ranbir Kapoor is growing "younger but wiser," she wrote in her birthday post for Ranbir. On Tuesday, the birthday boy woke up to a heart-warming greeting from Riddhima Kapoor, which came in the form of a throwback photo from last year - from Alia Bhatt's mom Soni Razdan's birthday, to be precise. Referring to Ranbir's movie Rockstar, Riddhima wrote: "To my 'rockstar' bro -Here's wishing you a very happy b'day! We love you so much."

In the family photo shared by Riddhima, Ranbir Kapoor can be seen posing with girlfriend Alia Bhatt and mom Neetu Kapoor.

Meanwhile, Neetu Kapoor also wished her "heartbeat" with a birthday greeting: "Love and blessings in abundance," she wrote.

Earlier this month, Riddhima revealed a hilarious anecdote about Ranbir from when they were younger. Speaking on an episode of The Kapil Sharma Show, Riddhima said Ranbir used to gift her clothes to his girlfriend: "Ranbir's girlfriend came home one day wearing a top, and I was like I couldn't find this top. That's when I got to know he has been taking my clothes and gifting it to her."

In terms of work, Ranbir Kapoor was last seen in Sanju. Ranbir Kapoor has Shamshera, co-starring Vaani Kapoor and Sanjay Dutt, lined-up. He will also be seen in an untitled film with Shraddha Kapoor. The actor will also star in Sandeep Reddy Vanga's Animal, with Anil Kapoor and Parineeti Chopra. Ranbir Kapoor co-stars with Alia Bhatt and Amitabh Bachchan in upcoming epic drama Brahmastra, which is directed by Ayan Mukerji.