Rana Naidu: Venkatesh And Nephew Rana Daggubati Are Going To Be "At Each Other's Throats" In New Series

"I cannot wait to work with Rana, we are going to have a blast on-set," said Venkatesh Daggubati 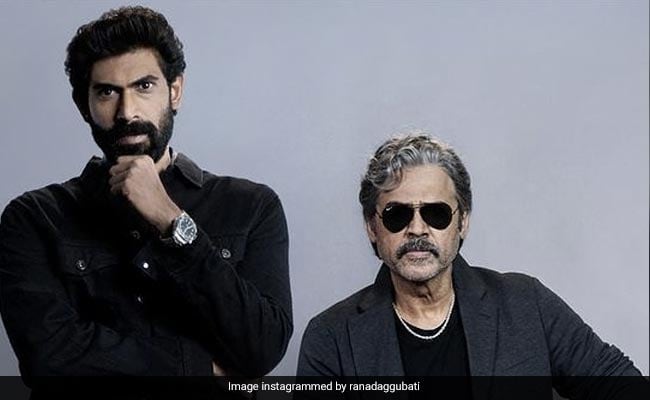 For the first time, we will see Venkatesh Daggubati and his nephew, actor Rana Daggubati, sharing screen space for a project. The duo announced their first series together - Netflix's Rana Naidu - on Wednesday. It is the Indian adaptation of popular American TV series Ray Donovan, which follows the story of a man who fixes issues of rich and influential families in Los Angeles. The character Ray Donovan will be named Rana Naidu in the Indian adaptation. Announcing the series on Instagram, Rana Daggubati wrote: "Always wanted to share the screen with my uncle the VICTORY V and my dream is finally coming true. As much as I love him off screen, in 'Rana Naidu' we are going to be at each other's throats. #RanaNaidu, coming soon on Netflix."

Venkatesh Daggubati's caption read: "I've seen Rana grow up right in front of me from a young boy to a fine actor. But in Rana Naidu he better watch out. #RanaNaidu, coming soon on Netflix."

Rana Naidu will be directed by Karan Anshuman and Suparn Verma and produced by Locomotive Global Media LLP.

Talking about collaborating with his nephew for the very first time (Venkatesh made a special appearance in a song titled Sye Andre Nanu in Rana Daggubati's Krishnam Vande Jagadgurum) for a series, the Swarna Kamalam actor said in a statement: "I cannot wait to work with Rana, we are going to have a blast on-set and this show is the perfect project for us to work on. I am a huge fan of Ray Donovan myself and the entire team is pulling in all the stops to ensure we do justice to it."

Rana Daggubati also talked about working with his uncle and with Netflix and said in a statement: "It's lots of special firsts for me. Working with my uncle Venkatesh and the first with Netflix in long form storytelling that's completely different from what both of us have ever done in our careers. I'm extremely happy to be with a crew and a platform that knows this the best."

In Ray Donovan, the titular character is played by Liev Schrieber. The series premiered in 2013 and ran for seven seasons.

To Gauri Khan, "Strongest Woman This Past Week," From Friends Farah Khan And Sussanne Khan