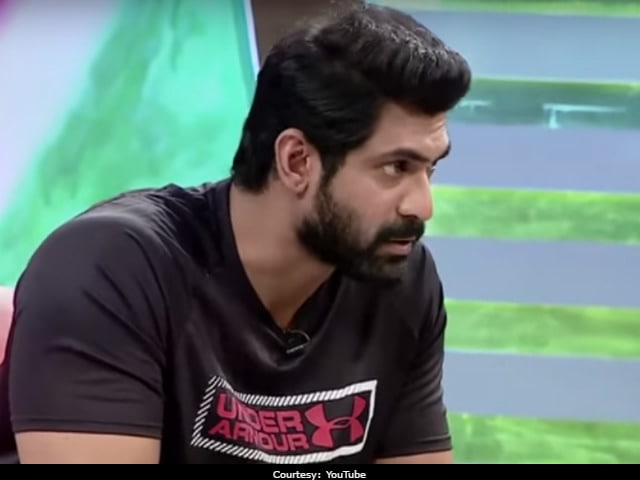 Rana Daggubati in a still from the video (courtesy YouTube)

New Delhi: Amidst the ongoing Baahubali fever, the Internet has dug up an old video of south star Rana Daggubati's interview) on a motivational talk show, which is now being vividly shared by netizens. The video is from a Telugu talk show, aired on Gemini TV and shows Rana Daggubati in conversation with guests, who are visually impaired. During his conversation, he reveals that he does not have vision in his left eye. Addressing a young guest on the show, Rana says: "You believe in god? You know who gives problems? He only gives to them who has the courage. I'm telling you one more thing about me, do you know I don't have an eye? I cannot see out of one of my eyes."

In the conversation, Rana also revealed that he got operated in his left eye when he was younger. "If I close my left eye I cannot see anyone. I only see out of my left eye. The left eye has been donated. The hospital that your mother had gone to, L V Prasad Hospital, is where I was treated. The operation happen when I was a kid, I was your brother's age at that time," he told the young guest.

Promoted
Listen to the latest songs, only on JioSaavn.com
Rana Daggubati is best known for the portrayal of the tyrannical, power-hungry king Bhallala Deva in S S Rajamouli's series of epic drama Baahubali. The second part of the magnum opus has raked in over Rs 220 crore at the box office, reported Box Office India. Rana, who has been part of Rajamouli's project for five years now, told news agency PTI: "I am sure the film has increased my market value."

Rana Daggubati has also starred in several Bollywood movies like Dum Maaro Dum, Department and Baby. He also played the protagonist in The Ghazi Attack which is India's first underwater war drama. Recently seen in Baahubali: The Conclusion, Rana Daggubati has south Indian projects like Nene Raju Nene Mantri and Madai Thiranthu in the pipeline.