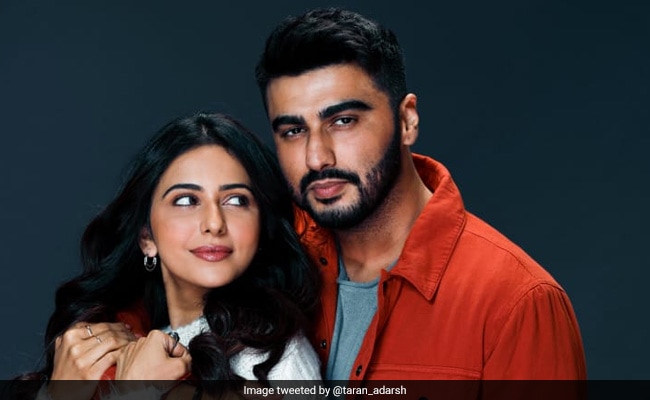 This will be Arjun and Rakul's first film together. (Image courtesy: taran_adarsh)

Arjun Kapoor and Rakul Preet Singh will collaborate for the first time for a Kaashvie Nair film, reported Bollywood trade analyst Taran Adarsh. The film, which will mark the directorial debut of Kaashvie Nair, will go on floors this month. The yet-to-be-titled film will be produced by John Abraham, Bhushan Kumar, Nikkhil Advani, Krishan Kumar, Monisha Advani and Madhu Bhojwani, Taran Adarsh stated in his report. The film will be a "cross-border love story," which will be shot extensively in Punjab and Los Angeles, Nikkhil Advani was quoted as saying by Mumbai Mirror.

Talking about his film, Nikkhil Advani told Mumbai Mirror: "It is a coming-of-age love story written by Anuja Chauhan, Amitosh Nagpal, and Kaashvie. It will be mostly shot in Punjab and Los Angeles. Arjun Kapoor and Rakul Preet Singh will be sharing screen space for the first time and we will be finalising the title and release date soon."

Joining him in the conversation with the publication, Bhushan Kumar said that the film will sum up an individual's "everyday experiences" with his/her family. "It sums up our everyday experiences and relationships with our families. The audience will definitely enjoy it," he said.

Speaking about the film, Arjun Kapoor said that he is "having a blast" while prepping for it. He also stated: "I have grown up in a joint family so I understood that it's the biggest pillar of love, strength and support. That's the essence of our film, which has its heart in the right place," reported Mumbai Mirror.

When asked about his co-star Rakul Preet Singh, Arjun said: "She is a beautiful, instinctive and generous co-star."

Kaashvie Nair is the daughter of Shashilal K Nair, who has directed hits such as Angaar and One 2 Ka 4. She has previously worked as an assistant director in Nikkhil Advani's Patiala House and D-Day.

This untitled film will be the fourth collaboration between Nikkhil Advani and John Abraham after Batla House, Satyameva Jayate and its sequel. Its title and release date will be announced soon.