Soundarya Rajinikanth is a graphic designer and filmmaker. She last directed Dhanush and Kajol in VIP 2 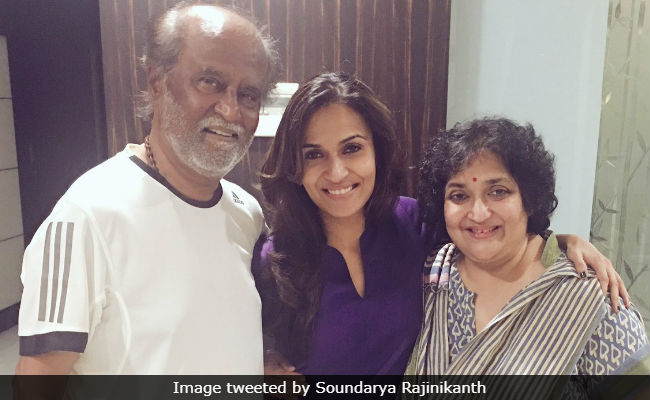 Soundarya with her parents Rajinikanth and Latha. (Image courtesy: Twitter)

Rajinikanth's younger daughter Soundarya is reportedly all set to marry actor businessman Vishagan Vanangamudi come February. Several websites, including The Times Of India and India Today, reported that Soundarya Rajiniknath and Vishagan Vanangamudi will get married on February 11 while the pre-wedding festivities will begin from February 9. Before the wedding ceremonies begin, a puja will be held at Rajinikanth's Chennai house in Poes Garden. The wedding will reportedly take place on a large scale after several parties, a haldi ceremony and a sangeet function. Soundarya's elder sister Aishwaryaa R Dhanush (married to actor Dhanush) is reportedly in charge of invitations.

India Today and TOI also reported that Soundarya is currently busy putting together her bridal trousseau and she was recently spotted at a saree store in Chennai. Soundarya and Vishagan got engaged last year.

3 years ago an angel came into my life !!! My miracle my #babyboy#VedKrishna#HappyBirthday baby #May6pic.twitter.com/ALnocwNj5b

Vishagan owns a pharmaceutical company and he is also an actor - he was recently seen in Manoj Bheeda's Vanjagar Ulagam.