Rajinikanth Was Asked To Pick Between Kaala And Kabali. What He Said 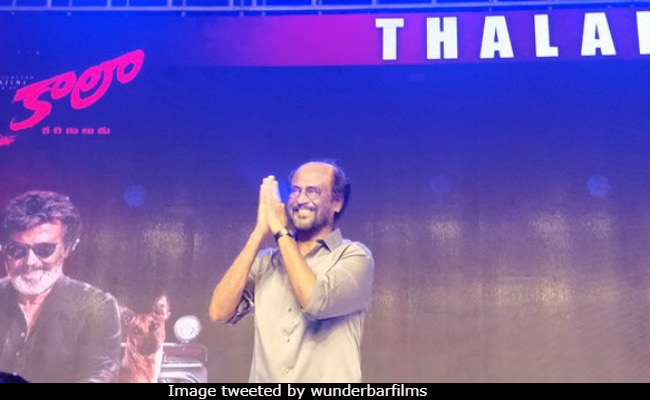 Rajinikanth at the promotional event of Kaala in Hyderabad (courtesy wunderbarfilms)

Chennai: Superstar Rajinikanth is excited about his much-hyped and soon-to-be released film Kaala. Speaking to NDTV, a radiant looking Rajinikanth said: "I like the picture. I am 100 per cent confident that my fans will like". The story of Kaala centres around a Dharavi-based gangster, who has his roots in Tamil Nadu's Tirunelveli district. Touted as the third largest slum in the world, the Chennai set of the film had recreated the Mumbai slum, capturing the essence of the life and diversity in Dharavi. Recollecting his shooting experiences at Dharavi earlier for a few Bollywood films and comparing them with the "unique experience" of working at the Dharavi sets in Chennai, Rajinikanth said: "The Dharavi setting in Chennai gave me a unique experience. It's very difficult to explain. I felt as if I was in Dharavi during filming."

Celebrating the day with all the amazing fan art & videos from you guys! #KaalaFromJune7th#Kaala#pic.twitter.com/VqqsqbjNLx

This is the second consecutive film for which the superstar has worked with director Pa.Ranjith. The first was 2016's Kabali, which had a Malaysian backdrop. Talking about his favourite among these two, Rajinikanth said: "Kaala...Kaala... I like it." He added: "I like Kaala more than Kabali."

Rajinikanth has made his debut in politics already but he had announced he would launch his party only ahead of the assembly elections. On the work front, he as two films in the line-up - 2.0 is a sequel to Enthiran, which will be directed by Shankar. He also has an untitled film with Karthik Subbaraj in the pipeline. When asked about his huge fan following and his hyper energy, the 67-year-old actor said: "People's support, fan's love and support give me energy".

On Monday evening, Rajinikanth was speaking at an event for the film's promotion.

In Karnataka, his remarks on the release of Cauvery waters have largely offended the film fraternity. The Film Chambers of Commerce has banned Kaala from release in Karnataka, following which the 67-year-old megastar approached the high court seeking the release of Kaala in the state. Kaala is set to hit screens on June 7.