Radhika Madan Wrapped Her Jaipur Getaway With A Fab Photoshoot At A Palace. Pics Here

"Did a little photoshoot before leaving this oh-so-amazing place... sorry palace," Radhika Madan captioned a bunch of photos 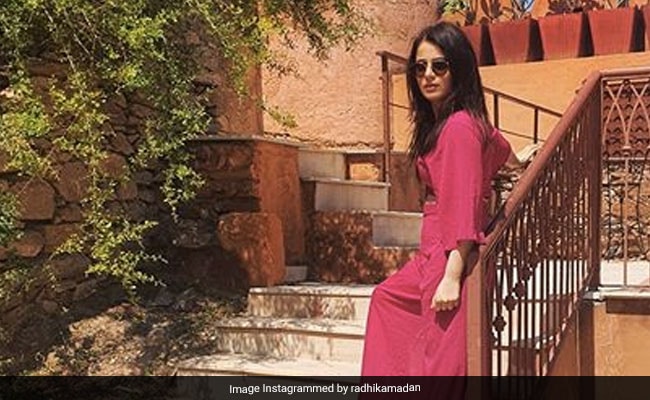 What's a getaway without a good photoshoot? And actress Radhika Madan knows that. The Angrezi Medium star, in an Instagram post, revealed she was chilling in Jaipur and that she opted for a quick, little photoshoot before bidding adieu to the Pink City. Playing with words, Radhika Madan wrote: "Did a little photoshoot before leaving this oh-so-amazing place... sorry palace." She was staying at Jaipur's Mundota Fort and Palace, with a stunning view, which formed just the perfect setting for her photoshoot. Radhika opted for pop pink separates and was every bit fabulous. Here, take a look:

Radhika Madan, who lives in Mumbai for work, flew back to her hometown Delhi earlier in May, to be with her family during the lockdown. In the past few months, Radhika has sharpened her handstand skills and taken ukulele lessons.

In May, she trended a great deal for sharing the new "airport look" - she wore gloves, a face mask and a face shield during her travel. Radhika, who is so very fond of photoshoots, didn't forget to click one at the airport - she flashed the victory sign for a photo. After two weeks of quarantine at home, she finally met her family.

Radhika Madan made her Bollywood debut with 2018 film Pataakha, after which she starred in films like Mard Ko Dard Nahi Hota and Angrezi Medium, in which she played the role of late actor Irrfan Khan's daughter. Radhika will next be seen in romantic drama Shiddat.