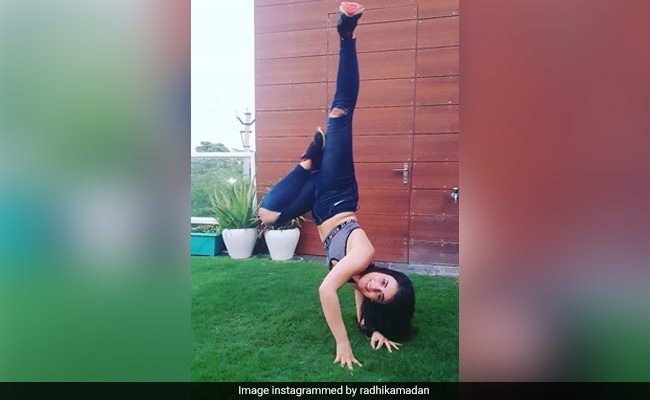 Actress Radhika Madan, who flew back home from Mumbai last month, often trends for her quirky posts shared from home. On Wednesday, the 25-year-old actress clubbed work-out motivation and humour goals in one post as she took a break in the middle of her fitness regime to click a photo of hers, only to post it with an ROFL caption later. Radhika Madan Instagrammed a photo of herself, dressed in athleisure, doing a handstand of sorts. The Angrezi Medium actress, who is upside down in the photo (like we said, she's in the middle of a handstand), added an ROFL caption to her post, explaining her situation. She borrowed a few lines from the song Aaj Kal Paon Zameen Par Nahi Padte from the 1978 movie Ghar and wrote she's upside down because: "Aaj kal paao zameen par nahi padhte mere.... LOL.

When at home, doing handstands is not the only thing that's keeping Radhika Madan busy - she's also learning a new musical instrument - the ukulele. "One step at a time," she captioned her post.

Earlier, Radhika had shared this headstand video of hers, with her mom's dinner plans as the background score. "Mummy ke dinner plans ke beech me apni sakhti," she had captioned her video.

Radhika Madan, who went into home quarantine for 14 days after travelling home from Mumbai, shared this "vanvaas ke baad" post when she hugged her mother after two weeks of going home.

Radhika Madan is best known for her roles in films such as Patakhaa and Angrezi Medium, in which she co-starred with actor Irrfan Khan. Shiddat: Journey Beyond Love is her upcoming film. Before she joined films, Radhika Madan also featured in the TV show Meri Aashiqui Tum Se Hi. She's also been a participant on Jhalak Dikhhla Jaa 8.