Raazi First Looks: Alia Bhatt Is A 'Respectful Daughter,' An 'Affectionate Wife' And A 'Spy' 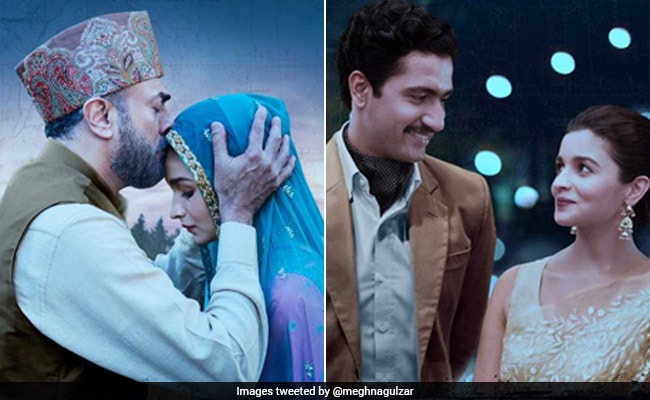 New Delhi: A day after Alia Bhatt revealed the trailer date of her forthcoming film Raazi, she now shared her first look. "A daughter," she wrote while sharing the picture, which features Alia with her on screen father, reportedly played by actor Rajit Kapur. Meghna Gulzar, who is the director of Raazi, described Alia in the film as, "She is a daughter. Respectful, righteous. #ShadesofRaazi." In Raazi, Alia Bhatt plays a Kashmiri woman and stars opposite Vicky Kaushal. Karan Johar, who launched Alia Bhatt in Bollywood, is the co-producer of the film. He gave the best introduction to Alia Bhatt's character in Raazi and wrote, "Strong, emotional, fiercely Independent. The kind of daughter everyone wants but I already have."

She is a Wife.
Ardent.
Affectionate. #ShadesofRaazi#Raazi@aliaa08@vickykaushal09@vineetjaintimes@karanjohar@apoorvamehta18@JungleePictures@DharmaMovies@RaaziHoonpic.twitter.com/G0ekG89CYH

The third poster introduces Alia as a 'spy.'

A secret and a mystery.
There is so much more to a woman than what the eye can see. #ShadesofRaazi#Raazi@aliaa08@vickykaushal09@vineetjaintimes@karanjohar@apoorvamehta18@JungleePictures@DharmaMovies@RaaziHoonpic.twitter.com/aRMj2Htm1l

Last evening, Alia Bhatt, via a short video from the film, revealed that the trailer of Raazi will release on Tuesday.

Two pictures of Alia Bhatt from Raazi was the actress' birthday gift to herself and us. As Alia turned 25 on March 15, she shared two pictures of herself from the sets of Raazi and wrote that they were taken on the 25th day of shoot and she also revealed that after 25 days, the trailer of the film will release. "Movies or in this case, my movies aren't just something I do for a living. It's kinda the reason I feel like I'm alive. So, on my 25th birthday, I've randomly picked out two images from the 25th day of shoot of Raazi and the trailer will be out 25 days from today. Happy birthday to me," she wrote.

Movies or in this case MY movies aren't just something I do for a living.. it's kinda the reason I feel like I'm alive SO...On my 25th birthday I've randomly picked out two images from the 25th DAY of shoot of RAAZI and and and the TRAILER will be out 25 days from today(9th April).. Happy Birthday to me

Promoted
Listen to the latest songs, only on JioSaavn.com
Of her role in the film, she earlier told news agency IANS, "I think in Raazi audience will see me in completely different avatar at least that is my wish because Raazi as a film is very different."

Raazi, based on Harinder Sikka's novel Calling Sehmat, releases on May 11.