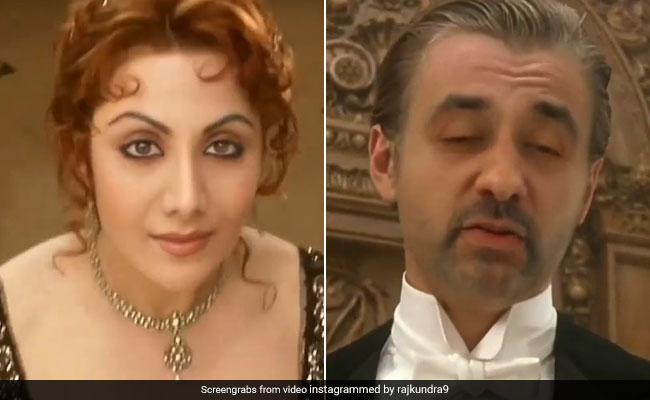 Raj Kundra surely knows how to entertain everyone on Instagram. He frequently treats his Instafam to hilarious videos on the platform. Raj's new video is the latest addition to his "#Rajfuntra" diaries. This time, he imagined himself and his wife Shilpa Shetty as the "Punjabi couple on Titanic." On Sunday, Raj Kundra posted a ROFL video on his Instagram handle which features a scene from the 1997 film Titanic. The scene originally had Hollywood actors Leonardo DiCaprio and Kate Winslet as Jack and Rose respectively.

Raj Kundra used his editing skills to swap Jack and Rose's faces with himself and Shilpa's. In the scene, Shilpa as Rose can be seen walking towards Raj (read Jack). They also enjoy each other's company just like Jack and Rose did in the scene. Wait, there is more. Raj Kundra added the Punjabi song Laung Laachi from the 2018 film of the same name in the clip.

While it is a treat to watch them as the "Punjabi couple" Jack and Rose in the video, we couldn't ignore Raj Kundra's caption as well. Raj wrote, "Finally...evidence that there was a Punjabi Couple on the titanic! I rest my case. Happy Sunday #SundayMasti #Rajfuntra #gratitude #laughteristhebestmedicine."

Raj Kundra keeps posting hilarious face-swapping videos on his Instagram handle. Let's take a look at a few of them.

In case you missed these, also watch Shilpa Shetty and Shamita Shetty's face-swapping videos on their respective Instagram handles.

Actress Shilpa Shetty married Raj Kundra, a businessman in 2009. The couple has two kids, Viaan Raj Kundra and Samisha Shetty Kundra. The couple welcomed Viaan in 2012. Samisha was born via surrogacy in 2020.

In terms of work, Shilpa Shetty now has films like Nikamma and Hungama 2 coming up. Shilpa has worked in films like Main Khiladi Tu Anari, Dhadkan, Baazigar, Life in a... Metro and Chor Machaaye Shor among others.