Priyanka Chopra's Post For Her "Forever Cheerleader" Ashok Chopra Is Everything 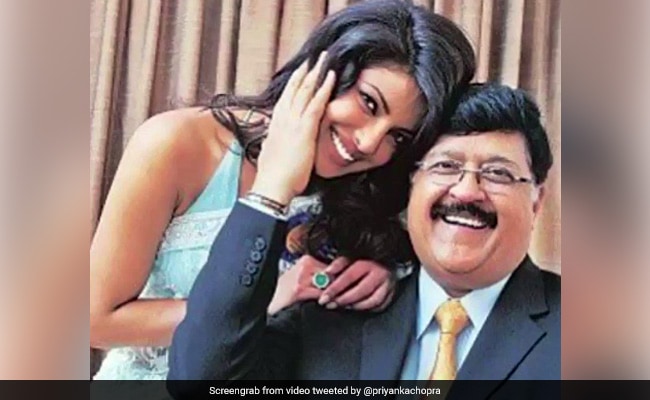 A still of Priyanka Chopra with her late father. (courtesy: priyankachopra)

On her late father Ashok Chopra's 70th birth anniversary on Sunday, Priyanka Chopra posted an adorable wish on her Instagram profile. The throwback video happens to be from an award function, where Priyanka Chopra's father collected the Best Actress trophy on behalf of his daughter. Along with the video, the Quantico actress shared a throwback picture with her late father. She wrote these words in her caption: "My forever cheerleader. You would have been 70 today. Miss you dad." Priyanka Chopra lost her father to cancer in the year 2013. The actress was extremely close to him and she even sports a tattoo on her wrist that reads: "Daddy's lil girl."

My forever cheerleader. You would have been 70 today. Miss you dad.

Earlier this year, Priyanka Chopra shared a throwback picture of her dad and wrote, "We're connected by heartstrings to infinity. Miss you, dad. Every single day." Take a look:

We're connected by heartstrings to infinity Miss you dad, every single day!

Priyanka Chopra co-owns the production house Purple Pebble Pictures along with her mother Madhu Chopra, as a part of which they have produced regional films such as Ventilator, Kaay Re Rascala, Pahuna, Sarvann and Paani among others. Paani won the National Film Award for Best Film on Environment Conservation/Preservation in 2019.

Priyanka Chopra was last seen in The Sky Is Pink with Farhan Akhtar and Zaira Wasim. The actress has many projects scheduled, which include Netflix's adaptation of The White Tiger, co-starring Rajkummar Rao, We Can Be Heroes and a film with comedian Mindy Kaling. The actress also signed Amazon's Citadel and Sangeet Project.