Priyanka Chopra and Nick Jonas' Roka Ceremony: 'It was a new thing for him and he took it seriously," said Madhu Chopra 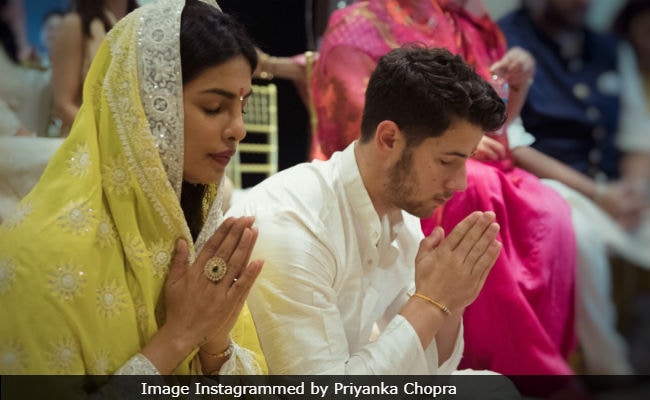 Priyanka Chopra's mother Madhu Chopra recently revealed that during the roka ceremony, Nick Jonas not only actively participated in the rituals but also "chanted the Sanskrit mantras accurately," reports DNA. During the media interaction, Mrs Chopra said that Nick Jonas and his parents Denise Miller-Jonas and Paul Kevin Jonas participated in the ceremony "beautifully." She told DNA: "It was a new thing for him (Nick Jonas) and he took it seriously. He followed what our panditji said, and chanted the Sanskrit mantras accurately. Both he and his parents did it beautifully. They are nice people."

Madhu Chopra also said that everyone in the Chopra family "loves" Nick Jonas and told DNA: "Nick is calm and mature. He's a wonderful person and everyone in the family just loves him. He's so polite and respectful towards elders. What more can a mother want."

Just like Madhu Chopra, Priyanka's cousin Parineeti Chopra too believes that Nick Jonas is "perfect" for her sister. After the roka ceremony, Parineeti shared an emotional note for the newly-engaged couple and wrote: "I can't think of a more a perfect man for her."

Today I witnessed magic and a fairytale ... When we were kids, mimi didi and I used to play "ghar ghar". We would pretend to be shy brides, have imaginary children, and serve tea to our husbands! cheesy, but its because we always believed in the magic of love and hoped we would both find that perfect man for us one day!! Today there was no pretending. I cant think of a more a perfect man for her. Like I said this morning, there are two ways of judging a human being. One - travel with them, and two, eat with them. Nick, I have done both with you. And so I know you're perfect for her!! Love her, because she loves you like mad! Protect her, because shes strong, but a soft soul inside. I love you both and wish you all the happiness forever!!!!! HAPPY ROKA AND FUTURE WEDDING!! @priyankachopra @nickjonas

Priyanka, who is currently filming The Sky Is Pink, co-starring Farhan Akhtar, celebrated her engagement on the sets of the film while Nick and his parents left for the US on Monday. Before leaving for the US, Priyanka Chopra took Nick and his parents to St Catherine's orphanage and her old home in Mumbai, where the American singer sang Lovebug for the children.

12 years of knowing these girls and in minutes they get all love struck by the #lovebug... thank you @nickjonas and our families. Thank you to the sisters and all the girls at St. Catherine's orphanage for opening your hearts to us again. I'll see you next time

Priyanka Chopra and Nick Jonas got engaged in a traditional roka ceremony over the weekend. Later in the evening, a grand engagement party was hosted, which was attended by celebrities like Alia Bhatt, Arpita Khan, Aayush Sharma. Mukesh Ambani was also attended the party along with wife Nita and daughter Isha Ambani.

Priyanka Chopra and Nick Jonas met at Met Gala in 2017. However, they reportedly started dating only a few months ago.