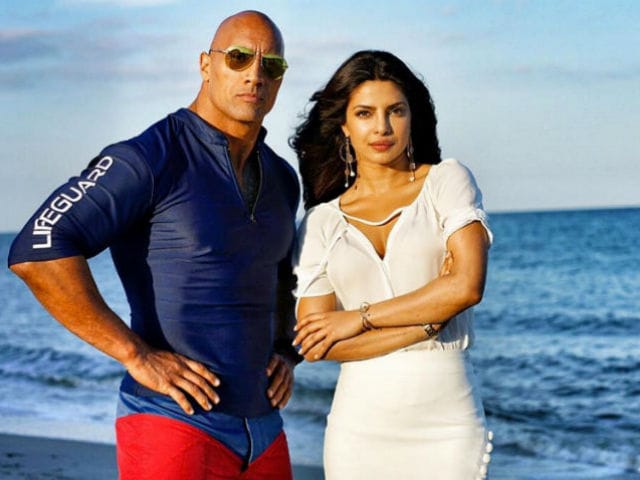 New Delhi: The release date of Priyanka Chopra's upcoming action-comedy Baywatch, also featuring Dwayne Johnson, has been pushed back by a week to May 26. The announcement was made by Paramount Pictures, reported news agency IANS. Priyanka, who portrays a negative character named Victoria Leeds in the film, marks her Hollywood debut with Baywatch. The Seth Gordon-directed film, which also features Zac Efron, Alexandra Daddario, Kelly Rohrbach, Ilfenesh Hadera, Jon Bass and Yahya Abdul-Mateen II, was earlier slated to release on May 19. The film is based on the hugely popular 1990s television series which featured David Hasselhoff and Pamela Anderson in the lead. Dwayne Johnson stars as lifeguard Mitch Buchannon, the role that The Hoff originally played.

Baywatch will now releases alongside Johnny Depp's Pirates of the Caribbean: Dead Man Tell No Tales and Life, starring Rebecca Ferguson and Jake Gyllenhaal, on the start of the Memorial Day holiday weekend in USA.

Priyanka Chopra was earlier reported as saying that her character Victoria is extremely feminine, very evil, extremely delectable, manipulative and patronising. In a Twitter chat, Priyanka had revealed that she doesn't do a slow-mo run on the beach in the iconic red swimsuit worn by Pamela Anderson and others in the TV show. "I'm not a lifeguard, I'm the interruption in their slow motion," she told NDTV in an interview.

The 34-year-old actress, who has temporarily shifted to USA, is currently busy shooting for the second season of her television series Quantico.

Priyanka was recently ranked #8 on the Forbes' list of the world's highest-paid TV actresses this year.

Promoted
Listen to the latest songs, only on JioSaavn.com
Priyanka Chopra has been nominated for her second People's Choice Award for Quantico, on which she plays FBI-turned-CIA agent Alex Parrish. Last seen at home in the film Jai Gangaajal, Priyanka recently produced the Marathi film Ventilator. She also announced her second film as a producer, the Punjabi-language Sarvann.