Priyanka Chopra, Home For The Holidays, Gets A Welcome From Brando The Dog 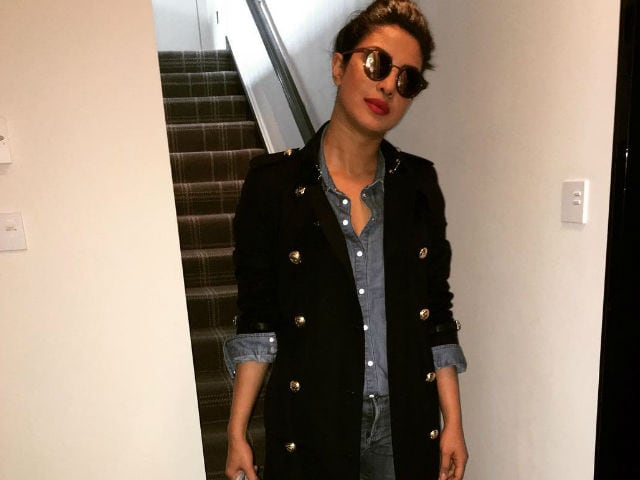 New Delhi: Priyanka Chopra is home for Christmas - yes, Mumbai is still home - and received an adorable welcome from Brando, the family dog. The 34-year-old actress has been living in New York, filming the second season of her TV series Quantico and India sees her all too rarely now. She flew out of the Big Apple a day ago, posting a picture of the stack of magazines she'd bought to read in-flight. In Mumbai, Brando was thrilled to see her. "Happy to be home, nothing like it," Priyanka wrote in her Instagram post - anyone still not convinced she hasn't moved to America for good, please note.

Happy welcome.. Brando baby... happy to be home... nothing like it.

And here's a photo of plane preps:

Before she left on vacation, Priyanka and her Quantico co-stars received and wore Christmas-friendly scarves on set:

Thank you post team of #Quantico for our CIA FBI integrated Christmas scarves. We love it. @thejohannabraddy @jazmasri

Back home, it's been a year since her film Bajirao Mastani was released. According to a report in mid-day, director Sanjay Leela Bhansali organized a Maharashtrian feast to celebrate. The team of Bajirao Mastani - including actors Deepika Padukone and Ranveer Singh - is now making Padmavati and, according to mid-day's source, were treated to a special meal when they broke for dinner. "Bhansali had arranged for a Puneri Maharashtrian dinner for 250-odd unit members. The order was given to a Dadar-based catering service. At around 10pm, when the Padmavati team took a dinner break, they were delighted to see local delicacies ready to be served," the source told mid-day.

Promoted
Listen to the latest songs, only on JioSaavn.com
Bajirao Mastani, a historical drama, was based on the story of Maratha leader Peshwa Baji Rao I and his consort Mastani, played by Ranveer and Deepika. Priyanka Chopra was cast as the Peshwa's first wife Mastani. She presumably didn't make it to the dinner but did post this tweet:

Thank u for making #Kashibai such a memorable https://t.co/8yYrSuQUhS u Sanjay sir. @deepikapadukone@RanveerOfficial#1YearofBajiraoMastanipic.twitter.com/adXoxJfs2x

Priyanka Chopra has a very eventful 2017 to look forward to after her well-earned Christmas break. When she returns, she will be up for a People's Choice Award for her performance as FBI-turned-CIA agent Alex Parrish on Quantico. She will also be prepping for the release of her Hollywood debut, the Baywatch movie, in which she plays the main antagonist. Baywatch, a film version of the iconic Nineties TV show, stars Dwayne Johnson, Zac Efron, Alexandra Daddario and others.