Priyanka Chopra And Her Parents In A Miss World Throwback. Circa 2000 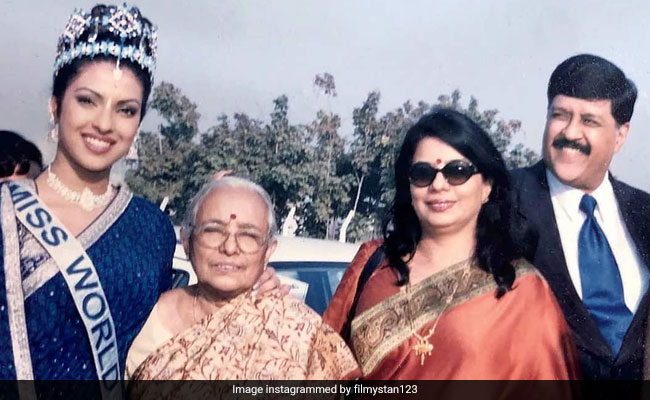 Our Thursday couldn't get any better as we chanced upon a throwback picture of Priyanka Chopra from the time when she was crowned Miss World in 2000. The picture is trending on social media for many reasons - first, it also features the actress' parents Madhu and Ashok Chopra and second, it shows the actress posing with her grandmother. Priyanka Chopra was crowned Miss World on November 30, over two decades ago, at the age of 18. This trending picture appears to be from the time when she visited her home in Bareilly after winning the Miss World title. In the photo, the actress looks every bit of stunning in a blue outfit.

Check out the aforementioned photo here:

Priyanka Chopra has shared several pictures from her Miss World diaries in the past. "What a throwback! Barely 18 yrs old with No idea that these many years later I'd still be representing India... #blessed #grateful," she had captioned one of her old posts while sharing another, she wrote: "#TBT Miss World at 18! The turn of the millennium...the year 2000! Wow. It feels like just yesterday I was living this dream. Now, almost 20 years later, my enthusiasm for changing the status quo remains as strong and is at the core of everything I do. I truly believe girls have the power to bring about change if they get the opportunities they deserve."

In terms of work, Priyanka Chopra was last seen in Ramin Bahrani's The White Tiger, which recently released on Netflix.