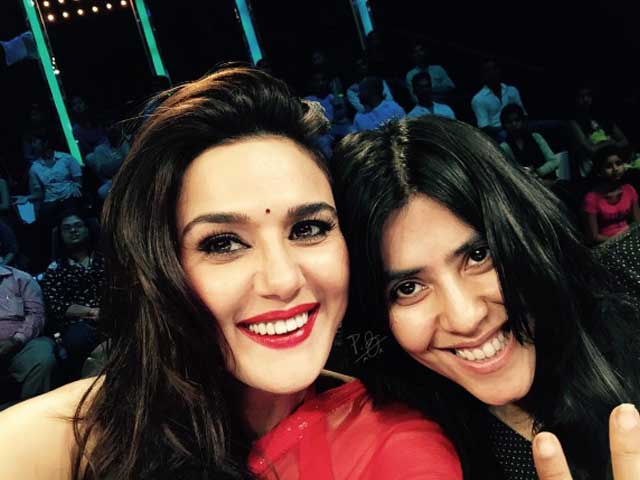 Preity with Ekta Kapoor on the sets of Nach Baliye. This image was posted on Twitter by @realpreityzinta

New Delhi: Actress Preity Zinta has declared herself 'surprised' by rumours that her stint as judge on reality show Nach Baliye may be ending. Preity judges the seventh season of Nach Baliye with author Chetan Bhagat and choreographer Marzi Pestonji.

On Twitter, Preity addressed rumours of difficult behaviour on set and denied that she was leaving:

2be honest I'm quite surprised 2hear rumors that I'm quitting the show not there on time when I'm always the first 1to arrive. Strange na

Preity was tweeting from the sets of the reality show, and apparently the only one there:

Good morning folks ! Back on the sets of nachbaliye waiting 4all the action to begin... But before that Waiting 4 others to arrive Ting

She also tweeted a shout-out to producer Ekta Kapoor, who has rubbished rumours that Preity was being dismissed:

On Sunday, Ekta told news agency PTI that Preity was going nowhere and that she had only been unavailable for one episode. "Preity has been our choice for the show right from the start and news about her leaving the show is absolutely rubbish. These are complete rumours and have no truth. Preity had informed us about her absence during one episode of the shoot on account of her grandmother's surgery well in advance so that we could plan the shoot with Remo D'Souza," Ekta said.

She also dismissed reports of 'erratic' behaviour on the part of the 40-year-old actress and IPL team owner. "It's completely untrue and anyone in the Nach Baliye family will vouch for the same. Our judges panel is very much on board till the finale and there is no trouble in this paradise," Ekta said.