No points for guessing who clicked this photo of the actress 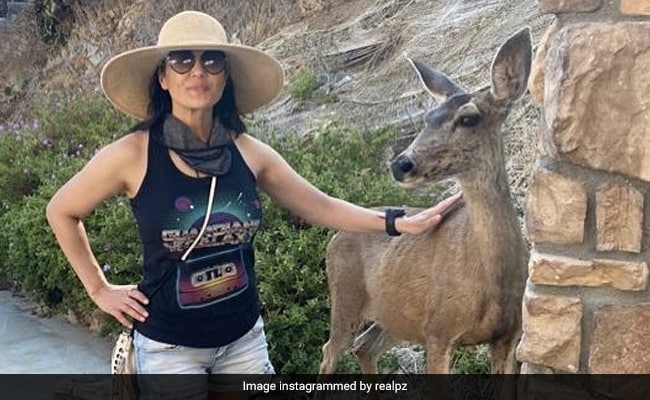 Preity Zinta checked into Instagram on Thursday with an amazing picture of herself and her "unusual friend" from her vacation with husband Gene Goodenough. Preity and Gene Goodenough have been holidaying since the start of the week. In her latest entry from her vacation, the actress posted a picture with a deer and wrote: "Unusual friends. #ohdear #vacay #ting." No points for guessing who clicked the picture of Preity. Yes, you are right. Her husband Gene Goodenough. "Pic by Mr Goodenough," she added to her caption. In the picture, the actress looks chic in a black tee and denim shorts. She completed her look with a pair of sunglasses and a summer hat.

On Wednesday, Preity Zinta shared a glimpse from her vacation in a really filmy way. She posted a slow-motion video of herself and Gene Goodenough and wrote: "Sometimes you just have to slow things down ... Matlab slow motion mein #vacation #ting." Check it out:

Before that, the actress shared a picture of herself and her husband "riding in golf carts around town." She wrote in her caption: "Didn't realise it could be so much fun." Take a look:

Preity Zinta, who made her debut in Bollywood with Mani Ratnam's 1998 film Dil Se, which is set against the backdrop of insurgency in Assam, has featured in films like Kal Ho Naa Ho, Veer-Zaara, Kabhi Alvida Naa Kehna, Kya Kehna, Sangharsh, Dil Chahta Hai, Farz, among others.