Pregnant Lisa Haydon Can't Stay Away From Surfing: 'Was Really Not Gonna... But'

Earlier in September, Lisa Haydon posted a lengthy note about her fondness for surfing and how she was eventually advised to stop going on the surf Lisa Haydon posted this on her Instagram story (courtesy sonamkapoor)

Lisa Haydon, who bid adieu to surfing during her first trimester earlier this year, couldn't hold back when she took her sisters wake-surfing during her recent vacation to Hong Kong. The 33-year-old actress-model shared photos of her wake-surfing on her Instagram stories along with a confession: "I was really not gonna join in. I just wanted my sisters to experience wake-surfing but this might have happened for five minutes." In another entry, Lisa Haydon, who is currently in her final trimester of pregnancy, can be seen surfing like a pro without any support. "Was really not gonna let go off the rope to be extra safe but they told me too... oh well," she captioned her Instagram story.

Take a look at Lisa Haydon's surfing photos here. So cool, aren't they? 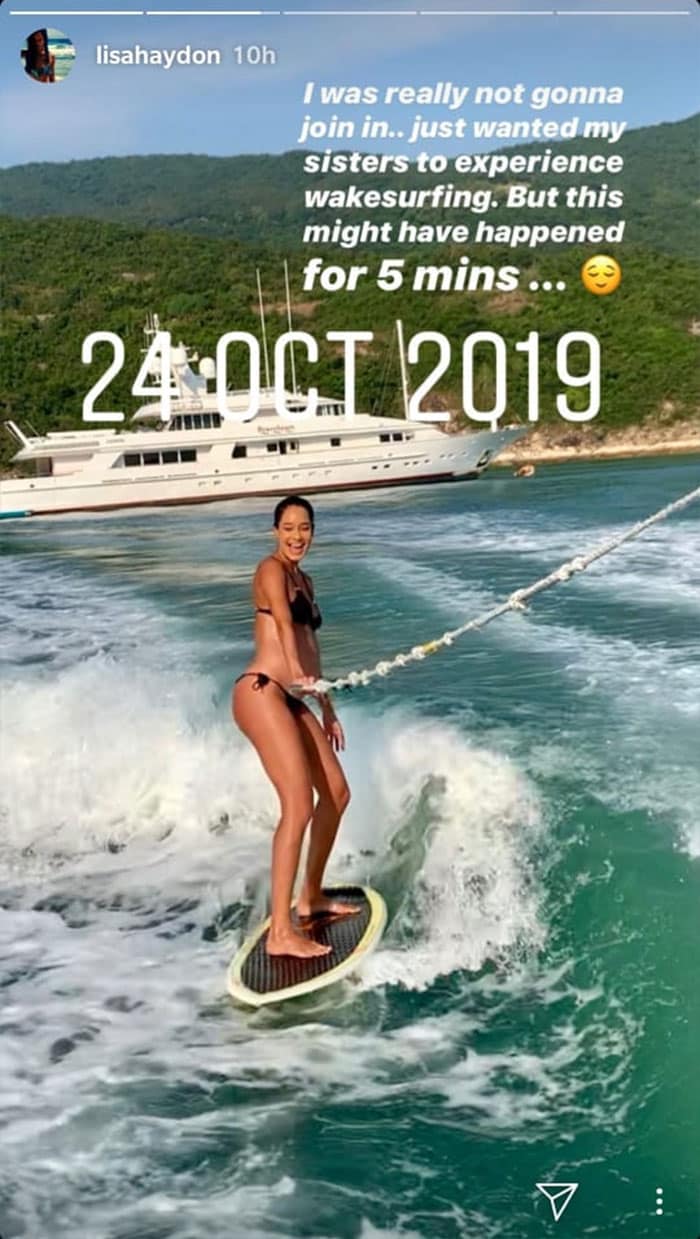 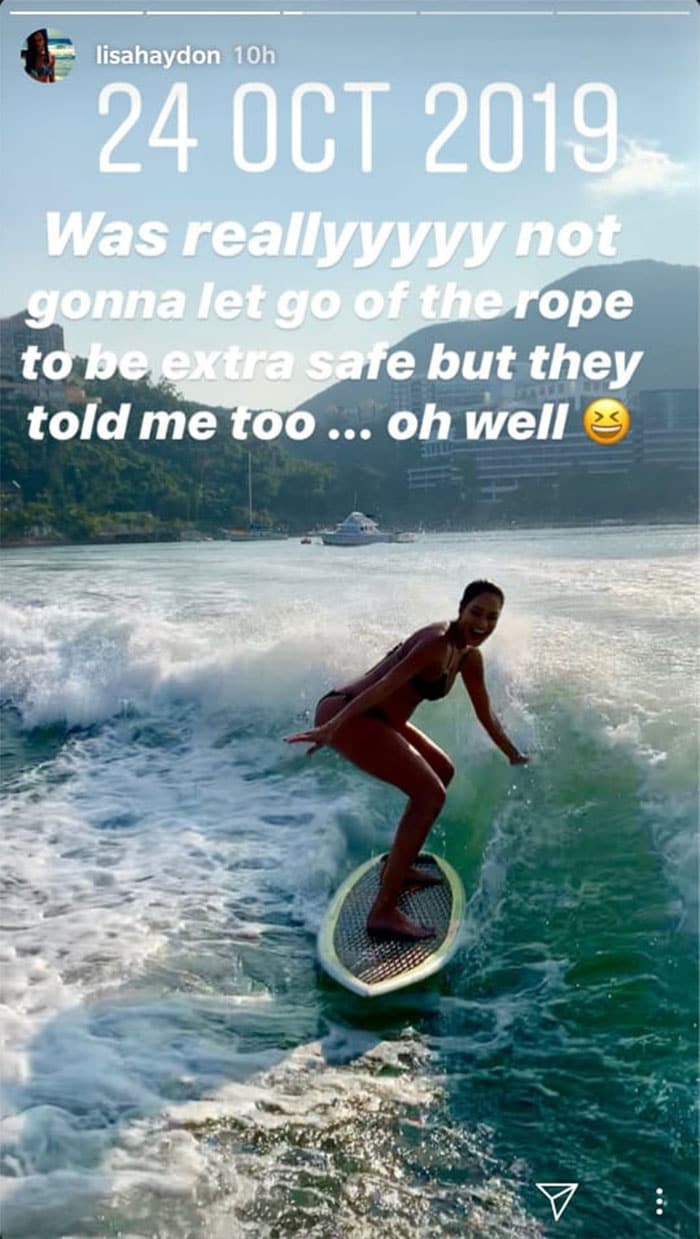 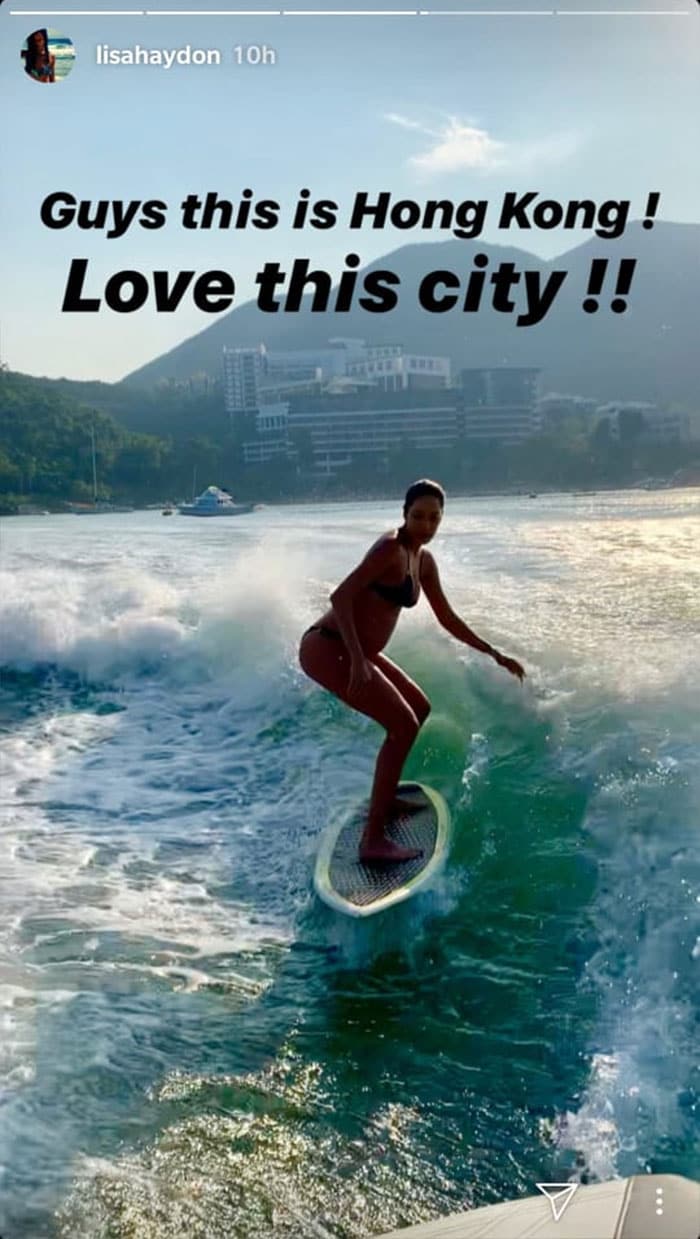 Earlier in September, Lisa Haydon posted a lengthy note about her fondness for surfing and how she was eventually advised to stop going on the surf during her "rough first trimester": "This first trimester was rough. Nothing like my first pregnancy... Surfing was something I had been doing from before and was disappointed at the thought of having to stop," she wrote in her post and added: "Week 16 was my cut-off to stop and so, until next year baby waves." Lisa also attached some guidelines for pregnant surfers to her post.

Baby waves with my baby bump I was gonna post this as my "coming out" pic. But i thought the joy of another addition to our family belonged to all three of us so that's what was posted instead. Here is a throwback to being #16weeks pregnant with #2. I wrote this a few weeks ago in answer to lots of questions about exercise when preg and nausea .. since writing this post I haven't done any exercise or even gone for a walk. Lots has been eaten though and our baby is so far, so good and that's all that matters. This first trimester was rough. Nothing like my first pregnancy... surfing was something I had been doing from before and was disappointed at the thought of having to stop. I checked with my doctor who surprisingly approved and said one should carry on as usual. Of course, with precautions. I tried doing other forms of excersize but, All other excersize would make me feel worse - this was practically my only release (and sucking on a Lemon) to feel better from the intense nausea and also get an adrenaline kick- I mean, it's a high. After doing loads of googling on the subject, I found multiple articles on surfing when pregnant.. and was relieved to know I'm not the only one. Positive, I haven't got many, if any, pregnant surfers following me , but if I do:-) here's what I learned and followed. 1.) surf on a foam board (unless modelling for first baby photo. Then pose with hard board;-) ) , 2.) try and paddle on your knees ... I actually felt nothing when paddling on my stomach, so I did. 3.) don't go out in crazy surf. 4.) listen to your body and to your doctor. This morning I took a moment to appreciate how much better life is feeling moving on from trimester one... another high. Week 16 was my cutoff to stop and so, Until next year baby waves

Lisa Haydon and Dino Lalvani are also parents to a son named Zack. The Ae Dil Hai Mushkil actress announced her pregnancy with an adorable post in August: "Party of four on the way," she wrote.

Party of four on the way

Since then, she's filled up her Instagram with her baby bump diaries.

Lisa Haydon is best known for her roles in films such as Housefull 3, The Shaukeens and Queen.