"Pool Days Are The Best Days" For Rhea Kapoor, In Mumbai Or In Amanbagh

Can you spot Masaba Gupta and Karan Boolani in the pictures Rhea Kapoor shared? 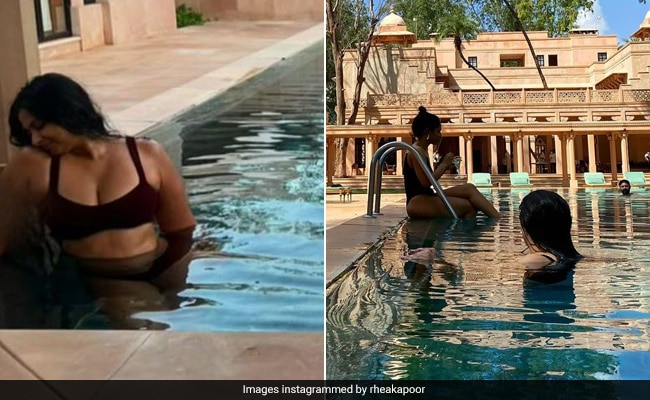 Rhea Kapoor is clearly having the time of her life in Rajasthan with her husband Karan Boolani. The couple chose to ring in Karan's birthday at a luxury resort in the state, and have been treating fans to some inside photos of their quick getaway. During the holiday, the couple spent hours enjoying a dip and swim in the pool. This comes as no surprise, given that both Karan Boolani and Rhea Kapoor are water babies. Sharing a bunch of pictures, Rhea has now declared that there is really no match for a day in the pool. “Pool days are the best days,” Rhea Kapoor wrote in the caption. With a pool like that, we cannot help but agree.

We can also see Karan Boolani in some of the images shared by Rhea Kapoor. Also spotted in the pool are actress-designer Masaba Gupta and Cookie Boolani, Karan Boolani's sister, who accompanied the couple on their quick getaway. Reacting to the image, former model and producer Ayesha Shroff said, “Love this place.”

Rhea Kapoor also gave us a glimpse of what Karan Boolani's birthday eve dinner looked like. Rhea Kapoor penned a special note for her husband on his birthday on October 6. She wrote, “Happy birthday to my partner in everything. Every year with you is more magical and fulfilling. There is no one I would rather grow up with. I love you so much.”

In the images, Karan Boolani and Rhea Kapoor are seen stealing a kiss amidst the celebration. Actress Neena Gupta, Masaba Gupta's mother, was the first one to drop a comment and it read, “Please wish him from my side.”

These happy pictures will definitely bring a smile to your face:

Karan Boolani too confessed that there was nowhere else he would rather be on his birthday. Sharing images from Amanbagh, the luxury resort at Rajasthan's Ajabgarh, Karan Boolani said, “Could not think of a better way to spend my birthday.” In the pictures, Karan Boolani can be seen exploring the Ajabgarh Forest Range and go leopard sighting.

Rhea Kapoor is the daughter of actor Anil Kapoor and designer Sunita Kapoor. Actors Sonam Kapoor and Harsh Varrdhan Kapoor are her siblings. Rhea Kapoor married Karan Boolani in an intimate ceremony in August, this year at the Kapoor residence.