"Some pictures express more than words ever could," wrote Pooja 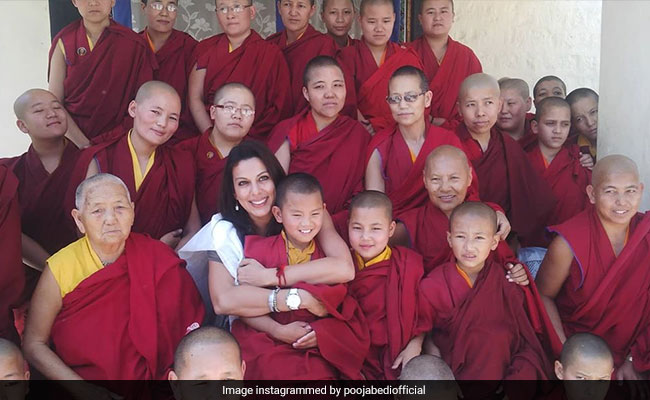 Pooja Bedi, on Wednesday, shared a picture of herself from the Karma Drubgyu Thargay Ling nunnery that was founded by her grandmother Freda Bedi in the 1960s. The nunnery is located in Tilokpur, Kangra Valley, Himachal Pradesh. Sharing a photo of herself sitting among a group of nuns, Pooja Bedi wrote: "Some pictures express more than words ever could. Look at their faces and what they all exude. A heart-warming moment at the Karma Drubgyu Thargay Ling Nunnery in Tilokpur, founded by my grandmother Freda Bedi who was later known as Gelongma Karma Khechog Palmo. #fredabedi, #happysoulwellness." Pooja Bedi is the daughter of noted Odissi dancer Protima Bedi, who died in 1998 at 49, and actor Kabir Bedi.

Recently, Pooja Bedi trended big time on social media after she shared a throwback picture of herself and her Jo Jeeta Wohi Sikandar co-star Aamir Khan. "Back on sets post 20 years of Jo Jeeta Wohi Sikandar with a throwback, an on-set photo with Aamir Khan from my award winning talk show Just Pooja. Masti then, masti now, masti forever!" read an excerpt from her caption.

In terms of work, Pooja Bedi was last seen in the 2011 film Shakti. She is best-known for her performance in the 1992 film Jo Jeeta Wohi Sikandar. She has also featured in movies like Vishkanya, Chittamma Mogudu and Lootere.

Pooja Bedi's daughter Alaya Furniturewalla is also an actress. She was last seen in Jawaani Jaaneman. Alaya has a three film deal with the producers of Jawaani Jaaneman, details of which have not been revealed yet.