Pics From Rhea Kapoor And Karan Boolani's After-Wedding Party With Friends. "Best Reception Ever," She Writes

"The after party thrown by the best friends in the world," wrote Rhea Kapoor 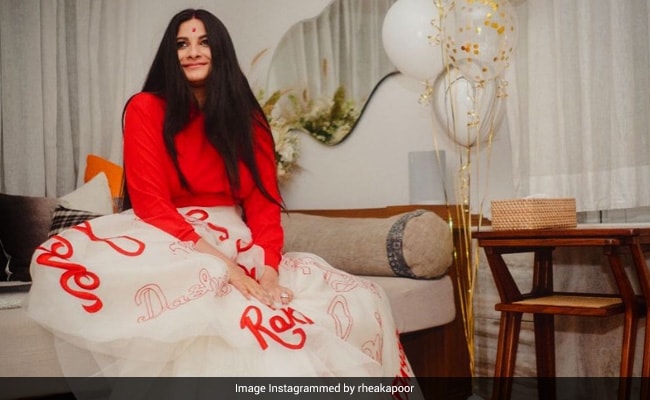 Rhea Kapoor, who married her long-time boyfriend Karan Boolani on August 14, shared pictures from her after-wedding party that was hosted by her close friends. The producer-fashion designer, on Wednesday, gave us glimpses of the party thrown by her friends and called it the "best reception ever." She looks gorgeous in a red and white ensemble by Abu Jani Sandeep Khosla. In one of the photos, Rhea Kapoor can be seen wearing a white outfit designed by her friend Masaba Gupta and cutting a cake with husband Karan Boolani. Sharing the photos, Rhea wrote: "The after party thrown by the best friends in the world because they can't help themselves is my love language. Best 'reception' ever."

Rhea Kapoor and Karan Boolani had a very intimate wedding earlier this month in the presence of family and only close friends, including Masaba Gupta. Rhea shared the first photo from her wedding with this adorable caption: "12 years later, I shouldn't have been nervous or overwhelmed because you're my best friend and the best guy ever. But I cried and shook and had stomach flips all the way through because I didn't know how humbling the experience would be. I'll always be that girl who had to come home to Juhu at 11 pm before my parents fell asleep. Only until now I didn't know how lucky I was to feel torn. I hope we make a family so close that we have many, many loves of our life. Mine are Karan Boolani, Sunita Kapoor, Anil Kapoor, Harsh Varrdhan Kapoor and Sonam Kapoor."

When Karan Boolani shared pictures from their wedding reception, he revealed how he fell in love with Rhea. "True story: we met on a movie set, she was new, I tried to bully her, ended up falling madly in love," he wrote in the caption.

Karan Boolani is also a producer.