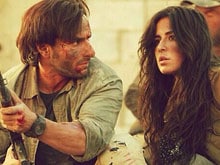 A still from Phantom.

New Delhi: Kabir Khan's Phantom, which released on August 28, has raked in a sum of Rs 21.24 crores in two days. While the opening day collection of the movie recorded a single digit figure with a little more than Rs 8 crores, on the day of Raksha Bandhan there was a 'solid 51%' hike in the numbers, which amounted to Rs 12.78 crores. Trade analyst Taran Adarsh tweeted.

Phantom, which is a screen adaptation of S Hussain Zaidi's book Mumbai Avengers, stars Katrina Kaif and Saif Ali Khan in the lead roles, is set in the backdrop of the 26/11 Mumbai attacks.

More than a week before the movie hit screens, Phantom was banned by a court in Pakistan on a plea filed by Jamaat-ud-Dawa (JuD) chief Hafiz Saeed, who is accused of masterminding 26/11 terror attacks in Mumbai. (Also Read: Katrina Kaif: Logical That Pakistan Will Have Problems With Phantom)