Parmanu - The Story Of Pokhran Trailer: John Abraham's Film Revisits History And How

The trailer of Parmanu - The Story Of Pokhran released on Friday. The movie is inspired from the 1998 Pokhran Nuclear Test. 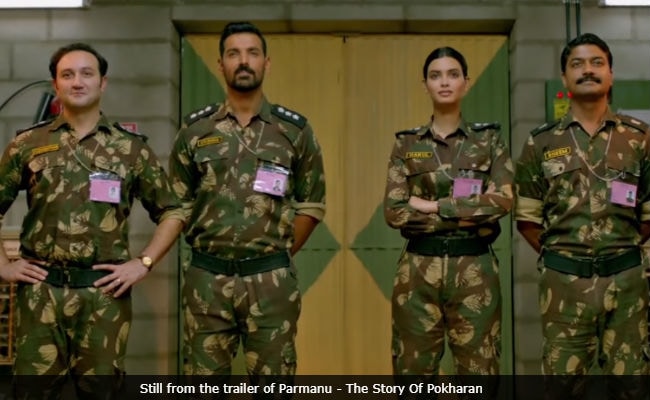 A still from Parmanu - The Story Of Pokhran. (Image courtesy: YouTube)

New Delhi: The much-awaited trailer of Parmanu - The Story Of Pokhran released on Friday and we couldn't have been more thankful. In the trailer, John Abraham and Diana Penty are seen clad in uniforms of the Indian army, who are apparently sent on a secret operation. The movie also features Boman Irani, American actor Zachary Coffin and renowned photographer Mark Bennington. Parmanu - The story of Pokhran is inspired by the real life event, however, the characters portrayed are fictional. The movie draws inspiration from the Pokhran nuclear tests which took place in Pokhran (Rajasthan) in 1998. Interestingly, the trailer was released on May 11, which earmarked the 20th anniversary of India's nuclear test explosions at Pokhran.

The teaser of theParmanu -The story of Pokhranwhich released last month showcased a timeline of India's most important historical events and left us asking for more and the trailer certainly quenched our curiosity and gave us an insight into the movie.

Promoted
Listen to the latest songs, only on JioSaavn.com
The fate of Parmanu - The story of Pokhran also suffered because of the legal tussle between John Abraham's JA Entertainment and Prernaa Arora's KriArj. As of now, the film is releasing without any credits given to the latter.

Stories based on patriotism seem to be a new favourite among filmmakers. After this Friday;s Raazi, Parmanu - The Story Of Pokharam also draws inspiration from a real event. Directed by Abhishek Sharma, Parmanu - The story of Pokhran will hit the screens on May 25.