Parineeti Chopra is in Nepal shooting for her next film 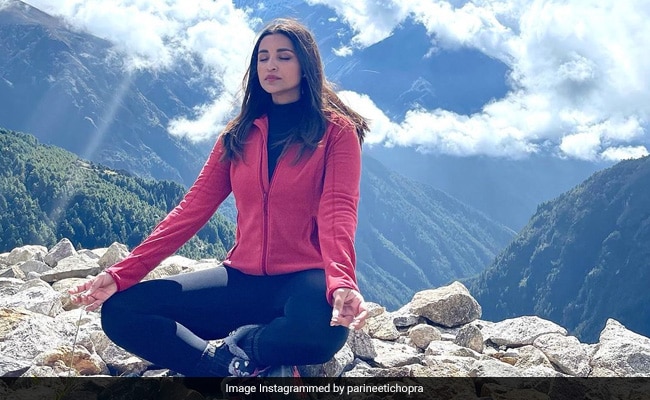 Parineeti Chopra has always been a bundle of energy, spreading smiles on-screen and off-screen. But what is the secret to her effervescent charm? Well, the actress has revealed it all in her new pictures from Nepal. Parineeti, who is shooting her next project in the country, is meditating in the lap of icy mountains in the photos. Dressed in casuals and a jacket, Parineeti looks at peace with the pristine blue sky and clouds in the background. Sharing the images, Parineeti wrote, “Daily meditation is my secret,” with sparkle and heart emojis. The images got a nod of approval from Parineeti's fans, who responded with heart emojis.

The actress is shooting for Sooraj Barjatya's Uunchai in Nepal. She is keeping her social media followers happy by posting regular updates. A few days ago, Parineeti Chopra shared a video of her playing football with a group of young girls. “Playing football with little girls, in the middle of the street, at 11,000 ft above sea level. To me, life is simply a collection of such heartwarming moments…Sigh.”

Before that, Parineeti Chopra shared a pic of herself looking at the majestic Mount Everest. Explaining how she felt standing in front of the natural wonder, Parineeti wrote, “Good morning, Mr Everest. You taught me a lesson in humility today.”

Parineeti Chopra also announced her association with Uunchaiwith a set of snapshots. Sharing details, the actress wrote, “Thrilled and honoured to be a part of the iconic cinematic universe of Sooraj Barjatya sir. Sooraj sir has defined and is the torchbearer of India's family entertainers and I can't wait to work under his tutelage; alongside this stellar and incredible cast.”

The actress added that she would be sharing screen space with Amitabh Bachchan, Anupam Kher, Boman Irani, Neena Gupta, Danny Denzongpa and Sarika in the film. “Let this magical journey begin,” Parineeti Chopra mentioned in the caption.

Parineeti Chopra also has Animal with Ranbir Kapoor in her kitty.