'30 More Days To Be Her:' Parineeti Chopra Gears Up For The Saina Nehwal Biopic

Parineeti Chopra shared an update about the Saina Nehwal biopic 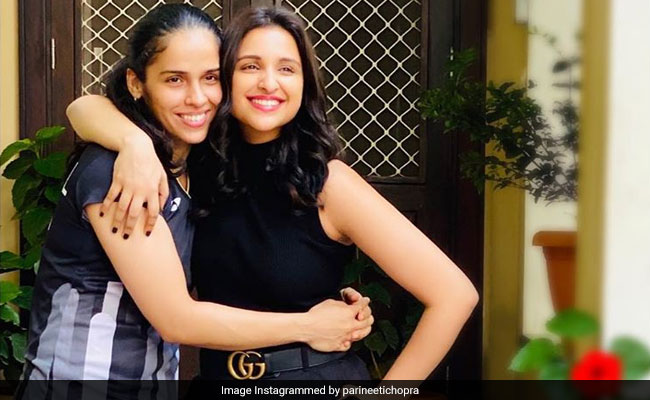 Parineeti Chopra, who is gearing up for the Saina Nehwal biopic, met the badminton player that she will be playing on screen during her recent Hyderabad visit. On Thursday, the 31-year-old actress posted a picture from her meeting with Saina Nehwal and she captioned her post: "30 more days to be her ... And live her." She added the hashtag #SainaNehwalBiopic to her post. The duo can be seen happily posing for the camera in the photograph. Parineeti wore black trousers, which she paired with a black top, while Saina opted for a casual outfit for the meeting. Parineeti's cousin Priyanka Chopra also liked the picture on Instagram.

30 more days to be her ... and live her!! #SainaNehwalBiopic @nehwalsaina

A few months ago, Saina Nehwal posted a picture of Parineeti and she wrote: "Looking forward to this journey together." Saina also wished the team luck for the project and added, "My best wishes to the team of the Saina Nehwal biopic." This is the post we are referring to:

Ahead of the film's shooting, Parineeti Chopra stayed at the Ramsheth Thakur International Sports Complex in Navi Mumbai for about 15 days in order to prepare for her role and to save time. "We took a strategic call to stay at this sports complex because I could get to train and shoot at the same location. It was important for me to better my game while shooting for the film because I want to perfect myself before shooting the portions where I have to play like Saina," Parineeti told news agency IANS.

During an interview with news agency IANS earlier this year, Parineeti said that as a part of the film's preparatory session, she binge watched several badminton videos on Saina Nehwal to get her body language right. "The most important advice that I got from my entire training team, Amole Gupte (film's director) Sir and everybody was that I must watch Saina's matches. I haven't watched that many badminton matches and I really want to play exactly the way she plays," said Parineeti.