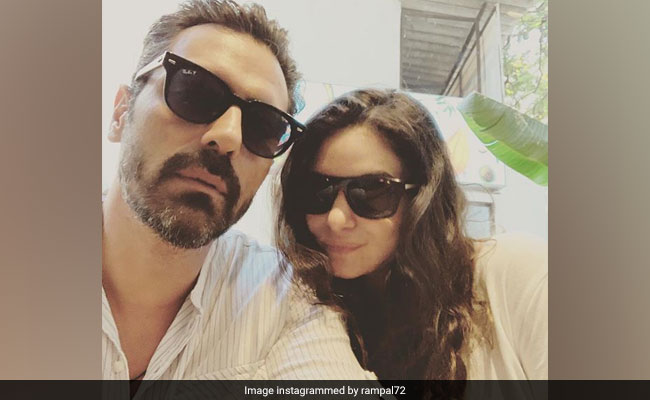 Arjun Rampal shared an adorable selfie along with his girlfriend Gabriella Demetriades on his Instagram profile on Thursday afternoon and the Internet simply loved it. The parents-to-be can be seen twinning in white outfits and they can be seen sporting black sunglasses in the picture and we must tell you that the couple looks adorable together. Another thing that caught our attention in the loved-up picture is Gabriella's pregnancy glow, which is hard to miss. Arjun added the caption: "Summer vibes" to the picture. Gabriella left a heart emoji on Arjun's post and in no time, the comments section was flooded with several heart emojis posted by fans. A fan reviewed the picture as "Coolest."

Arjun and Gabriella announced the big news about their pregnancy by sharing identical posts on their respective social media accounts a few days ago. In the loved-up picture, Gabriella, sporting a baby bump, could be seen curled up in Arjun's arms. "Blessed to have you and start all over again.... Thank you baby for this baby," read the caption on Arjun's post, while Gabriella captioned it: "Grateful for you two. Can't wait to meet you."

Rumours about Arjun and Gabriella's romance started doing the rounds in November last year. The couple frequently express their love for each other on social media as well.

Spread the love. Happy Valentines to all. #valentines

Arjun Rampal is also a father to Mahikaa and Myra - his two daughters with his ex-wife Mehr Jesia. Arjun married Mehr in 1998 and the couple announced their separation in the year 2018.

Arjun Rampal was last seen in JP Dutta's 2018 film Paltan. Gabriella is a model and she also featured in the 2014 film Sonali Cable.