Panipat Song Mard Maratha: Arjun Kapoor's Shout Out To The Power Of Marathas

Mard Maratha: Arjun Kapoor wrote: "Pride in their hearts and strength in their will." 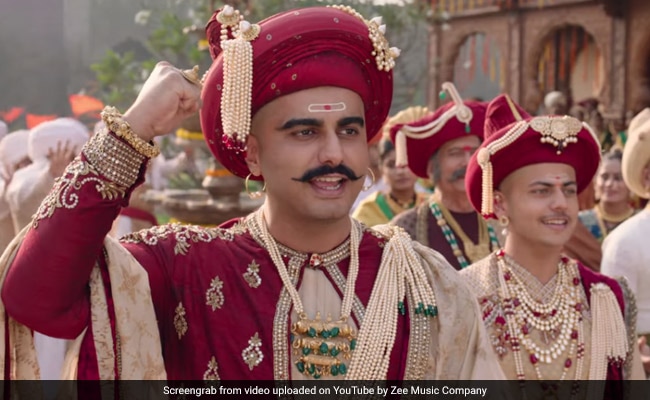 Mard Maratha: Arjun Kapoor in a still from the song. (Image courtesy: YouTube)

The first song from Ashutosh Gowariker's film  Panipat released on Wednesday. The song, titled 'Mard Maratha,' is about celebrations taking place in the Maratha kingdom. The song, which features the film's lead actor Arjun Kapoor, along with Kriti Sanon, Mohnish Bahl and Padmini Kolhapure, is a shout out to the power of Marathas. Describing Mard Maratha, the makers wrote: "Pride in their hearts and strength in their will." With its hard-hitting lyrics and its intense visuals, Mard Maratha stirs up the viewers' emotions and how. Kriti Sanon's lavani dance sequence deserves a special mention.

Mard Maratha has been composed by Ajay-Atul. It has been sung by Ajay-Atul, Sudesh Bhosle, Kunal Ganjawala, Swapnil Bandodkar, Padmanabh Gaikwad and Priyanka Barve. The lyrics are by Javed Akhtar.

The film is set against the backdrop of the Third Battle of Panipat, which was fought between the Maratha forces under the leadership of Sadashiv Rao Bhau (played by Arjun Kapoor in the film) and Ahmad Shah Abdali (played by Sanjay Dutt), who lead the invading Afghan forces. Kriti Sanon plays the role of Sadashiv Rao Bhau's second wife Parvati Bai. The film is slated to release on December 6 this year.

Other than Arjun, Kriti and Sanjay Dutt, the film also features veteran actors like Padmini Kolhapure and Zeenat Aman. It also stars Mohnish Bahl and Nawab Shah. The film has collaboratively been produced by Sunita Gowariker's production house AGPPL and Vision World.

Arjun Kapoor, who plays the lead role in the film, in an interview with news agency IANS earlier this year, said, "I didn't choose Panipat, it chose me. I didn't go seeking. I always had a wish, and sometimes you just need to want something and it happens. It has happened at a time when I think I was ready for it... If I had to choose to do a period drama or a period war film, there is no choice other than Ashutosh Gowariker."