Panipat: "Bravery is to stand for what you believe in, even if you stand alone," wrote Arjun Kapoor 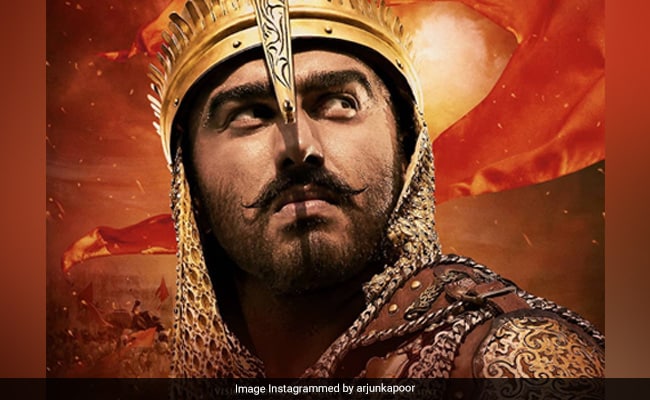 The trailer of Ashutosh Gowariker's Panipat  will release on Tuesday but the makers of the film quenched the curiosity of fans to some extent by unveiling the looks of the film's lead actors. Arjun Kapoor plays the role of Sadashiv Rao Bhau in the film, who was the commander-in-chief of the Maratha army in the Third Battle of Panipat. The actor, who went bald for the film, can be seen wearing a golden headgear, looks fierce on the poster. Sharing his look from the film, the actor wrote: "Bravery is to stand for what you believe in, even if you stand alone."

Meanwhile, Kriti Sanon, who plays Parvati Bai, the second wife of Sadashiv Rao Bhau, can be seen dressed in a saree on the poster. The actress can be seen wearing heavy ornaments, which includes a pair earrings, a nose ring and a crown on the poster and she looks absolutely stunning. Sharing her look from the film, Kriti wrote: "Parvati Bai - A true queen needs no crown."

Sanjay Dutt's look from the film is very intense. The 60-year-old actor plays Ahmad Shah Abdali, the king of Afghanistan, who fought against the Marathas in the Third Battle of Panipat. Sanjay Dutt can be seen wearing a heavy headgear. He sports a long beard and kohl-rimmed eyes on the poster. Sanjay Dutt captioned his post: "Death strikes where his shadow falls."

The film is set against the backdrop of the Third Battle of Panipat, which was fought between the Marathas and the invading forces from Afghanistan. The battle took place on January 14, 1761 in Panipat (present day Haryana) and it is considered to be one of the most momentous battles of the 18th century. The film has collaboratively been produced by Sunita Gowariker's production house AGPPL and Vision World and it is slated to release on December 6.

In an interview earlier this year, the film's lead actor Arjun Kapoor said that he has always wanted to be a part of the period drama. The actor told news agency IANS: "I didn't choose Panipat, it chose me. I didn't go seeking. I always had a wish, and sometimes you just need to want something and it happens. It has happened at a time when I think I was ready for it... If I had to choose to do a period drama or a period war film, there is no choice other than Ashutosh Gowariker. He would do justice to the opulence, emotions and the storytelling."