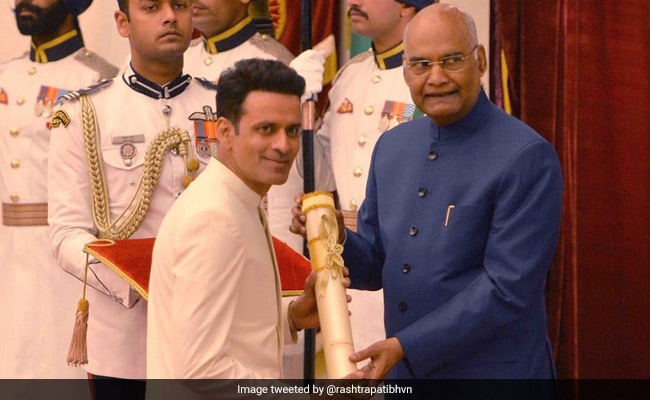 Actor Manoj Bajpayee, best known for his work in films such as Satya, Pinjar, Gangs Of Wasseypur and Aligarh, were among those who received their Padma Awards in New Delhi on Saturday. The 49-year-old actor received his Padma Shri, the fourth highest civilian award, from President Ram Nath Kovind at the ceremony, after which he tweeted: "It was an honour and privilege." On President Ram Nath Kovind's official Twitter, Manoj Bajpayee was described as: "A renowned film actor, he is known for his versatile roles and has worked in more than 60 films." Not only Manoj Bajpayee but even his colleagues celebrated his win with congratulatory tweets pouring in on Twitter.

It was an honour and a privilege sir @rashtrapatibhvnhttps://t.co/f43Ny309yR

On Twitter, Manoj Bajpayee was congratulated by his co-stars Taapsee Pannu, Bhumi Pednekar and Randeep Hooda and filmmakers Hansal Mehta and Anurag Kashyap and others.

Congratulations sir...we've learnt so much from all your performances and more than that enjoyed watching them..more power to you https://t.co/vqvGKoZ54w

Again a huge congratulations to @BajpayeeManoj for this award honouring him for his contribution to Indian Cinema. https://t.co/FD82gT6JHH

Manoj Bajpayee is best known for his striking performances in films such as Satya, Shool and Pinjar from the Nineties and recent ones like Aligarh, Rajneeti, Sonchiraiya, Zubeidaa and of course, Gangs of Wasseypur series. Manoj Bajpayee is a two-time National Award winner - Best Supporting Actor for Satya and Special Jury National Award for Pinjar.

Soon after the Padma Awards were announced in January, Manoj Bajpayee had said he was glad no one abused him for being a Padma awardee: "My friends, relatives and followers are very happy with it. I have observed that till now, no one has abused me on social media and no one has created controversy when my name announced as one of the awardees of Padma Shri so, I am really happy and it's a good thing that when you get an honour nobody has raised objections against it," reported IANS.

The Padma Awards were presented in two ceremonies at the National Capital. On March 11, actor Mohanlal was honoured with the Padma Bhushan, actor-choreographer-director Prabhudeva received the Padma Shri and musician Shankar Mahadevan received the Padma Shri from President Kovind. On Saturday, former cricketer Gautam Gambhir, mountaineer Bachendri Pal, ISRO scientist Nambi Narayanan and Odisha tea seller D Prakash Rao were among the recipients of the honours.