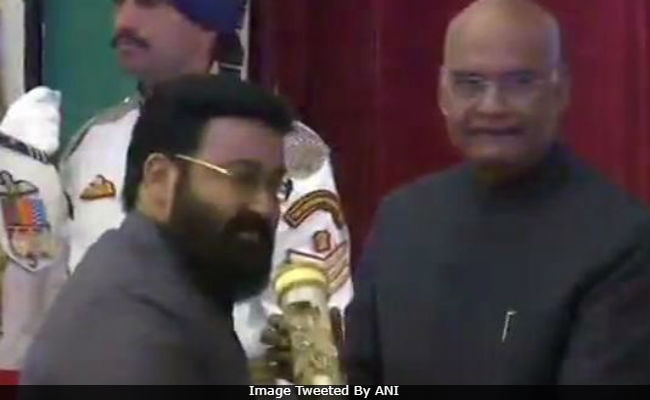 Actor Mohanlal, actor-choreographer-director Prabhudeva and musician Shankar Mahadevan were among those who received their Padma Awards from President Ram Nath Kovind in New Delhi today. 56 of the 112 awardees announced earlier this year received their honours today. Actor Kader Khan was posthumously honoured with the Padma Shri - Mr Khan died last December at the age of 81. Malayalam superstar Mohanlal, star of acclaimed films such as Iruvar, Vanaprastham and Bharatham, received the Padma Bhushan, Indian's third-highest civilian award. Mohanlal has been in films made in several Southern languages as well as Hindi projects such as Company. Mohanlal has won five National Awards for his work in the films Kireedam, Bharatham, Vanaprastham, Janatha Garage and Pulimurugan. Here is Mohanlal receiving his Padma Bhushan from President Kovind:

"It's a great honour. It's a great achievement as an individual, as an actor. It's my 41st year in the film industry so I'm giving all the credit to my colleagues, my family and those who supported me in this beautiful journey," Mohanlal said at the Padma Awards after receiving his Padma Bhushan, reports news agency ANI.

Man of many talents Prabhudeva received the Padma Shri. Prabhudeva is admired equally for his skills as a dancer and choreographer in songs such as Urvasi Urvasi and Mukkala and as an actor in Kadhalan, Minsara Kanavu and other films. Prabhudeva has also directed movies like Rowdy Rathore and Wanted. Here he is receiving the Padma Shri from President Kovind:

Singer Shankar Mahadevan, one-third of the composers Shankar-Ehsaan-Loy, received the Padma Shri. "A lot of my music has been created with my two partners - Ehsaan and Loy so, I would consider them as equal recipients of this," Mr Mahadevan told news agency IANS after the National Awards were announced on the evening before Republic Day. Shankar-Ehsaan-Loy have films like Dil Chahta Hai and Kal Ho Naa Ho to their credit. Mr Mahadevan receives his Padma Shri from President Kovind:

Actor Manoj Bajpayee will receive his Padma Shri when the next set of awards are presented.