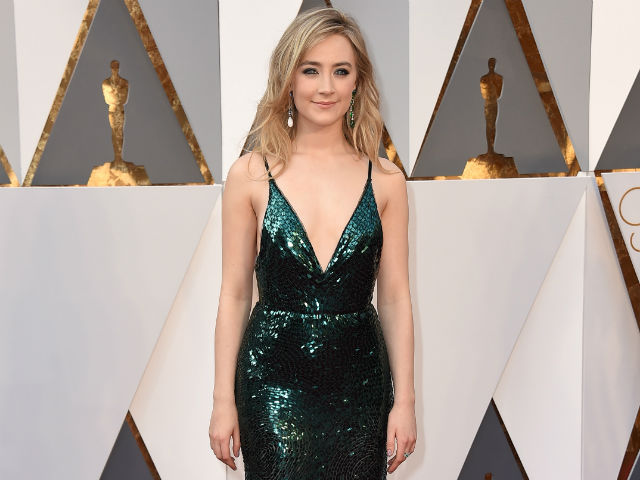 California: Hollywood's top stars oozed glamour on Sunday as they arrived on the Oscars red carpet.

Here are a few key looks and trends from the A-list fashion parade at the Dolby Theatre:

Belle of the ball

Sweden's Alicia Vikander has taken both the acting and fashion worlds by storm in the past year. On Sunday, she looked like the princess of Hollywood ready for her Oscars close-up. And she took home a golden statuette.

A best supporting actress winner for her role in The Danish Girl, Alicia floated onto the red carpet in a strapless pale yellow Louis Vuitton gown with silver accents and an asymmetrical hemline. Her brown tresses were in a half up-do, most of it hanging loose and curly down her back.

On Twitter, some compared her look to that of Belle in the Disney classic Beauty and the Beast. Not a bad call. 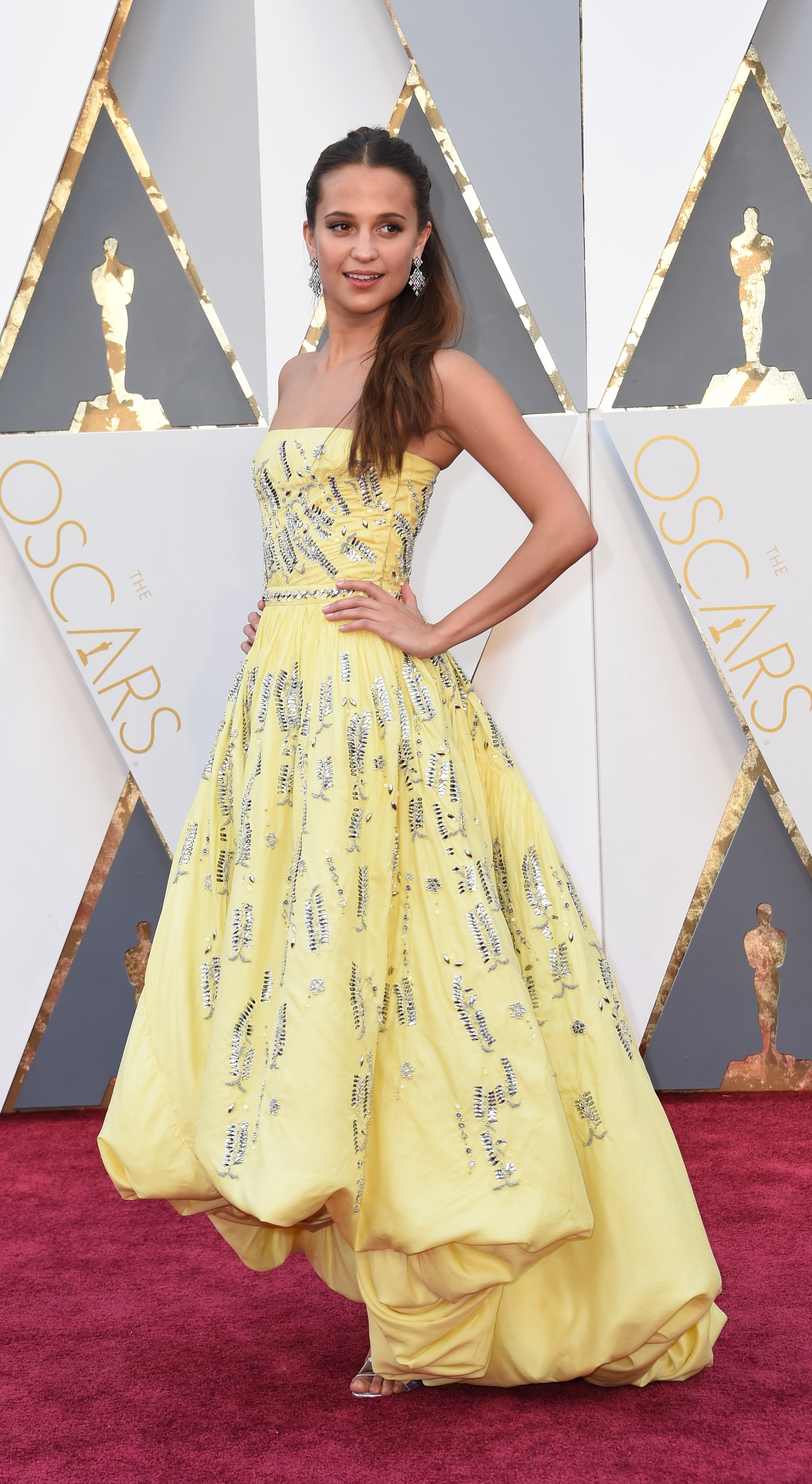 Blue skies and warm temperatures greeted the elite. And they responded by embracing blue as the colour of the moment. Best actress winner Brie Larson, who earned the Oscar for her searing performance in Room, wowed in a bright blue Gucci gown with a floating skirt full of pleats and a silvery belt.

"This has been a dream of mine since I was seven years old," she told a television channel, referring to just being an Oscars nominee. 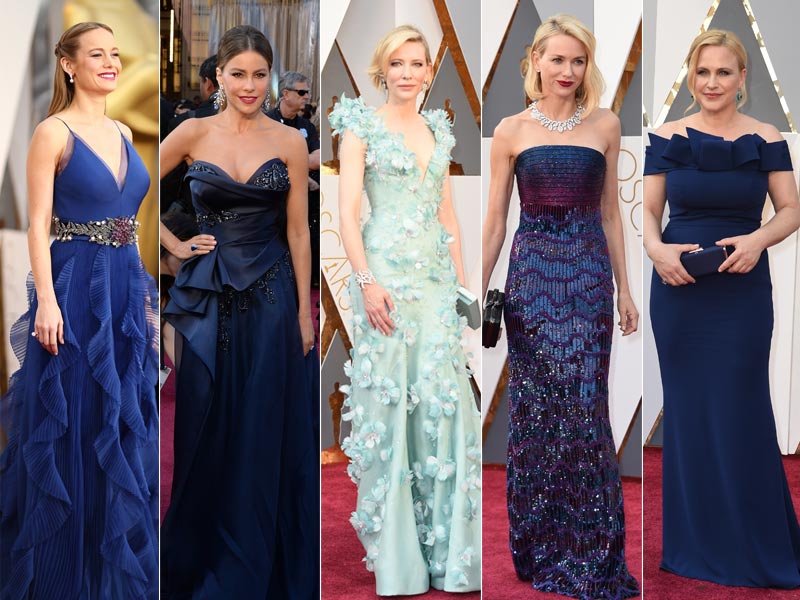 White is not the easiest colour to wear for most women. But Hollywood's A-listers are fearless.

Rooney Mara, competing against Alicia Vikander in the best supporting actress category for her role opposite Cate Blanchett, looked edgy in a long-sleeved white Givenchy lace gown with a diamond midriff cut-out.

Lady Gaga, nominated for an Oscar for her song Till It Happens to You, from the campus rape documentary The Hunting Ground, stunned Oscar fashionistas with her white gown-pantsuit combo by Brandon Maxwell. 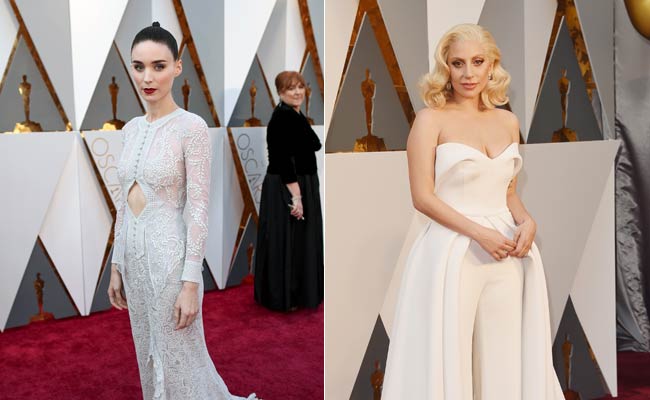 The dresses are often the focus on the red carpet, but the jewellery is also worth a look.

Britain's Daisy Ridley, the heroine of Star Wars: The Force Awakens, wowed the crowd in a Chanel gown, suitably sparkly for the star of the latest chapter in the intergalactic space saga and an eye-catching ring-bracelet combo.

And Charlize Theron, the statuesque star of Mad Max: Fury Road, looked stunning in a red Dior gown with a plunging neckline and a long head-turning Harry Winston diamond necklace. 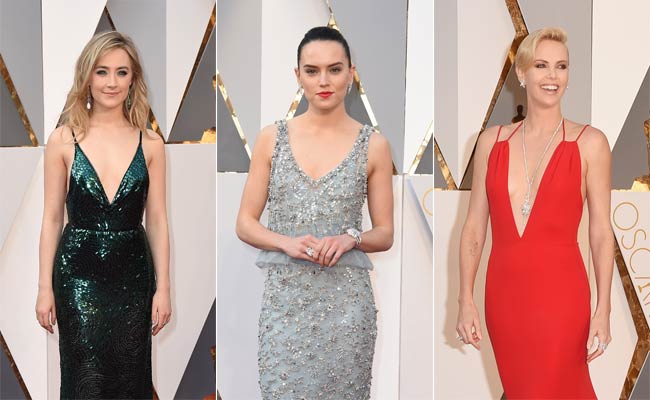 Sylvester Stallone, whose loss to Mark Rylance in the best supporting actor category was one of the surprises of the night, looked slick in a blue dinner jacket with black and blue lapels, and a black shirt and bow tie.

Eddie Redmayne, who won an Oscar last year for his portrayal of Stephen Hawking in The Theory of Everything and was a nominee again this year for The Danish Girl, looked sharp in an Alexander McQueen tux with a velvet jacket.(Also Read: Oscars: Best Quotes From Show Mention Race, Climate Change, Cookies)

But he said that he misjudged the warm weather.

"I thought it would rain this year so I wore velvet, and I'm sweating like a fiend," he said. 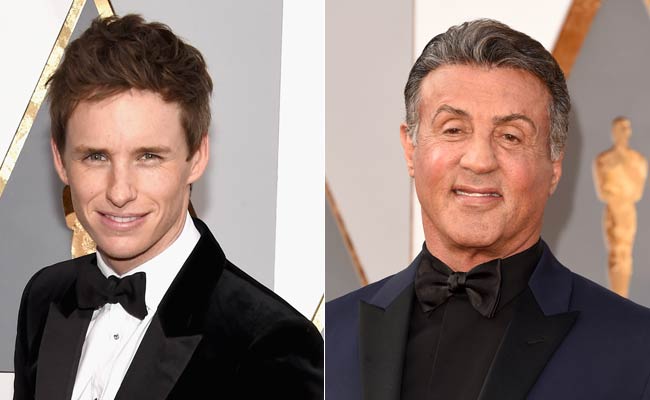