Oscars 2019 - Spider-Man: Into The Spider-Verse's Academy Award Is Antidote To #OscarsSoWhite

Spider-Man: Into The Spider-Verse on Sunday won the Oscar for Best Animated Film - a reward for its innovative visuals and strong messages 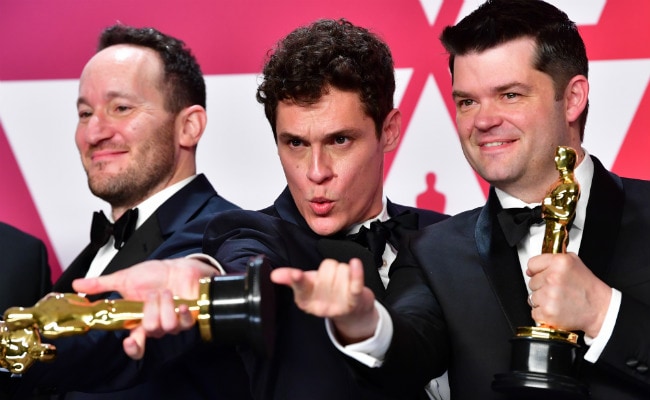 Spider-Man: Into The Spider-Verse with their Oscar (courtesy AFP)

Spider-Man: Into The Spider-Verse on Sunday won the Oscar for Best Animated Film - a reward for its stunning, innovative visuals and strong messages about diversity and family that won over both moviegoers and critics.

"To our audience, thank you so much. We love you, and we just want you all to know -- we see you, you're powerful. This world needs you," co-director Peter Ramsey told the audience at the Dolby Theatre.

The half-black, half-Latino teen - like Peter Parker before him - is just trying to survive adolescence in New York, find a girl who likes him and figure out who he is.

But a bite from a radioactive spider changes all that.

And things get really weird when Miles is thrust into a free-wheeling world with multiple Spideys in parallel dimensions, including Spider-Ham (yes, a pig) and two women.

Parker is in the film as well, as a mentor to Miles.

The classic tale of good and evil is told in a new way - rather than be stuck in some cardboard comic-book universe, this Spider-Man for a new generation wears Nikes and listens to rap.

The film is a perfect antidote to the #OscarsSoWhite complaints that have plagued the Academy of Motion Picture Arts and Sciences in recent years.

And it fits in with the new faces of Marvel blockbusters, especially those seen in best picture nominee Black Panther.

"In a way, the heart of the movie is Miles' coming-of-age story, but we wanted to tell this in a completely new and unconventional way," said producer Christopher Miller, director of the big-screen Jump Street films.

"We wanted to put someone totally different in Spider-Man's shoes and under that mask."

Spider Verse recalls the visual style of the original comic books, with less refined art and speech balloons that appear on screen.

"There are flash frames that allow for unusual compositions, and there are new sound effects and stylized visuals that are spread throughout the movie," Miller said.

"There are scenes where you feel you are inside a comic book."

But it also incorporates new ways of looking at animation.

In one jaw-dropping scene, Spider-Man jumps from a building as he is discovering his powers. But the camera angle turns, giving the impression that he is falling... up.

It's simple but effective, and kept moviegoers glued to their seats and cheering: the film has so far earned more than $350 million worldwide and a 97 percent "Fresh" rating on Rotten Tomatoes, which aggregates reviews from critics.

Miles is voiced by 23-year-old Shameik Moore, an Atlanta-born actor and singer with Jamaican roots.

And like any good superhero flick, there are Easter eggs for fans.

There is the customary cameo appearance by Stan Lee, the co-creator of Spider-Man and Marvel legend who died at age 95 a month before the film's release in December.

The name of the other mastermind behind Spider-Man - Steve Ditko, who died in June 2018 -- is listed in Miles' phone directory.

oscars 2019Spider-Man: Into The Spider-Verse