Kevin Hart said: "I'm not going to continue to go back and tap into the days of old when I've moved on" 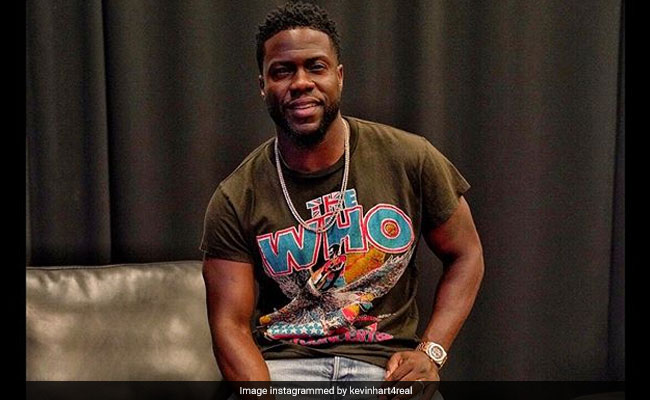 Kevin Hart during a concert in Australia. (Image courtesy: Instagram)

Kevin Hart posted a video to Instagram Thursday evening claiming that the Academy of Motion Picture Arts and Sciences asked him to apologise for a number of his old tweets using homophobic language, but he refuses to do so.

Some quick background: This week it was announced that Hart would host the 91st Oscars ceremony on February 24 - so naturally his Twitter found itself under the microscope. Anyone wanting to disqualify Hart, at least in the court of public opinion, had a cornucopia of homophobic tweets to choose from.

Several of those tweets began surfacing shortly after. Around the same time, it appears that some of them were deleted.

"Yo if my son comes home & try's 2 play with my daughters doll house I'm going 2 break it over his head & say n my voice 'stop that's gay,' " read a 2011 tweet that Hart deleted this week, according to BuzzFeed News.

Several other tweets using various homophobic slurs remain on Hart's account, including one asking "why does [Damien Dante Wayans'] profile pic look like a gay bill board for AIDS," with this strange brag tacked on at the end: "Booom, I'm on fire tonight."

In another that remained up as of publication time, Hart says, "Lmao @ all of the woman asking me where the pic is, I'm not passing along a pic of a naked man!!! That would make me gay by association."

In a video posted to his Instagram on Thursday night, Hart boldly announced that he refused to apologise - even though the Academy requested one of him.

"So I just got a call from the Academy, and that call basically said, 'Kevin apologise for your tweets of old or we're going to have to move and find another host,'" he says in the video. "They're talking about the tweets from 2009, 2010."

"I chose to pass, I passed on the apology," he continues. "The reason I chose to pass is because I've addressed this several times. This is not the first time this has come up. I've addressed it. I've spoken on it. I've said where the rights and wrongs were. I've said who I am now vs. who I was then. I've done it. I've done it. I'm not going to continue to go back and tap into the days of old when I've moved on, and I'm in a completely different space in my life."

It's important to also note that many articles, including this one, noted a 2015 Rolling Stone interview in which he addressed homophobic jokes from his stand-up routine - but not his Twitter account.

"We feed Internet trolls and reward them. I'm not going to do it, man. I'm going to be me. I'm going to stay on my grind," concluded Hart. "Regardless, Academy, I'm thankful and appreciative of the opportunity. If it goes away, no harm no foul."

"I know who I am & so do the people closest to me. #LiveLoveLaugh," read text accompanying the video.

I know who I am & so do the people closest to me. #LiveLoveLaugh

Earlier in the day, Hart posted an Instagram video with a caption saying, "Stop looking for reasons to be negative. . . . If u want to search my history or past and anger yourselves with what u find that is fine with me. I'm almost 40 years old and I'm in love with the man I am becoming."

In the accompanying video, a shirtless Hart reclines on a bed and echoes the caption.

"My team calls me: 'Oh my god, Kevin the world is upset about tweets you wrote eight years ago,'" he says. "If you don't believe people change, grow, evolve as they get older then I don't know what to tell you. If you want to hold people in a position where they always have to justify or explain their past, do you. I'm the wrong guy, man."

None of this should have come as a surprise to the Academy. Hart has made quips like these in his stand-up as well.

"One of my biggest fears is my son growing up and being gay. That's a fear," he said in the 2010 special "Seriously Funny." "Keep in mind, I'm not homophobic, I have nothing against gay people, do what you want to do, but me, being a heterosexual male, if I can prevent my son from being gay, I will."

As BuzzFeed's Adam Vary pointed out in a tweet, "he seems to have basically stopped tweeting those words after 2011 - i.e. the year his first stand-up movie became a hit."

That's not a coincidence. While not directly discussing his tweets, Hart's 2015 Rolling Stone interview, in which he discusses gay jokes in his stand-up, shed some light onto why homophobic slurs stopped appearing in his Twitter feed.

"It's about my fear. I'm thinking about what I did as a dad, did I do something wrong, and if I did, what was it? Not that I'm not gonna love my son or think about him any differently," he said. "I wouldn't tell that joke today, because when I said it, the times weren't as sensitive as they are now. I think we love to make big deals out of things that aren't necessarily big deals, because we can. These things become public spectacles. So why set yourself up for failure?"

Of course, digging through a celebrity's old Twitter feed for offensive jokes has become something of a ritual after the announcement of a high-profile gig.

Director Brett Ratner resigned as a producer of the Oscars in 2011 after he used an anti-gay slur (the very same one that Hart employed so often). Disney fired Guardians of the Galaxy director James Gunn from helming a third installment of the movie after some of his Twitter jokes about rape and sex with children resurfaced.

But not everyone loses their gigs, even if the tweets surface. When Melissa Villasenor was announced as a new Saturday Night Live cast member in 2016, she deleted more than 2,000 tweets, but not before the Internet detectives struck. Some of them were seen as racist, such as when she wrote, "Coworker at forever21 dates black guys and she said she will set me up on a blind date for valentines, I said yes but I'm scared." Trevor Noah found himself in a similar position after taking over The Daily Show, when many of his old tweets that critics called "anti-Semitic" and "sexist" resurfaced.

It's not just relegated to Hollywood, either. Milwaukee Brewers reliever Josh Hader took the mound at this year's All-Star Game at Nationals Park. When he walked back off at the end of the game, he found tweets from when he was 17 years old being splashed across the Internet. Many of these were considered racist and homophobic, such as one that simply read "I hate gay people."