A R Rahman wrote on Twitter: "Getting ready for the Oscar concert with the LA philharmonic orchestra" 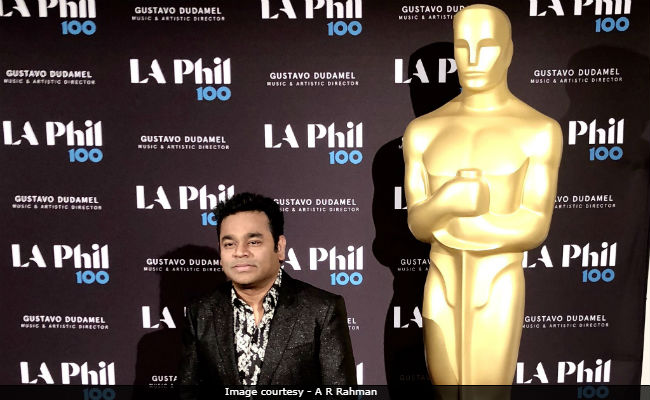 New Delhi: A R Rahman performed at the 2018's Oscar Concert, where he collaborated with LA Philharmonic Orchestra. He shared a picture of him from the event on Twitter and wrote: "Getting ready for the Oscar concert with the LA philharmonic orchestra! Photo by Kevin Doucette..." This was the second time in 90 years that the Academy Awards hosted a musical concert, including the five original score nominees from this year, a report on academy award's official site read. Rahman, who had won two Academy Awards for his score from Slumdog Millionaire was also included in the line-up. The first ever Oscar Concert was put up in 2014.

Here's what A R Rahman tweeted:

Getting ready for the Oscar concert with the LA philharmonic orchestra ! .....Photo by Kevin Doucette .. pic.twitter.com/gkC97FDTF6

Look who he found:

Look who is here

The Oscar Concert was organised as a part of the week-long celebrations ahead of the 90th Academy Awards, reported academy's official site. A R Rahman reportedly performed at the Oscar concert with the likes of Tan Dun, Quincy Jones, Mica Levi, Rachel Portman and many more.

In 2009, Rahman had performed for the first time at the Oscars. His music for 2008's Slumdog Millionaire won him two Academy Awards, the same year. He performed again in 2011 for his film 127 Hours and then in 2012 as a part of Oscar Sangamam headlined by Hans Zimmer, of The Dark Knight Rises fame.

At 90th Academy Awards, three songs from the Hollywood film Lake of Fire composed by Qutub-E-Kripa, A R Rahman's students from his academy - KM Music Conservatory - have been nominated under Best Original Score category.

Promoted
Listen to the latest songs, only on JioSaavn.com
Rahman is not new to the Oscar's nominations; two of his scores from films Million Dollar Arm and The Hundred Foot Journey, also made it to contended list of Oscar nominees in 2010. In 2011, he was nominated for Best Original Score for film 127 Hours.

The 90th Academy Awards will be held on March 4 (early Monday morning in India) at the Dolby Theatre in Hollywood, Los Angeles.
Comments