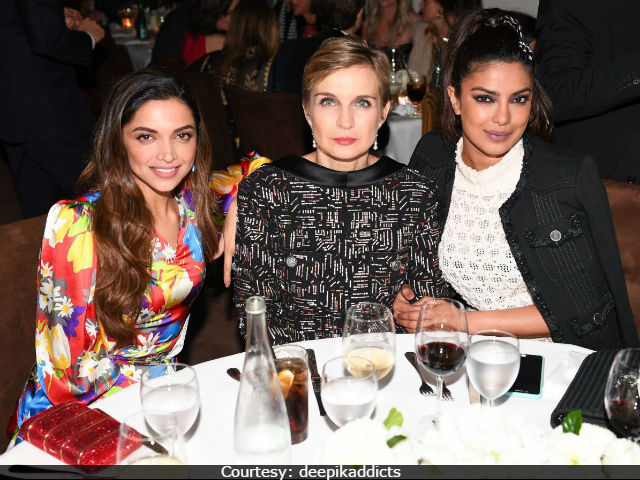 Deepika and Priyanka photographed together at the Oscars pre-party (Courtesy: deepikaddicts )

New Delhi: Oscars 2017 is just few hours away and Bollywood actresses, whom we have lost to Hollywood, Deepika Padukone and Priyanka Chopra, are already making news with their appearances at the 89th Academy Awards pre-Oscars party in Los Angeles on Saturday. Priyanka shared pictures from the gala night on Instagram while Deepika's pictures are being shared on social media. The xXx 3 star had earlier denied that she will be attending the event this year. On Saturday, Priyanka Chopra had confirmed her attendance by posting a selfie with rock legend Mick Jagger. Oscars 2017 will be held in the famous Dolby Theatres in Los Angeles on Sunday night.

Check out Deepika's pictures at the pre-Oscars party.

Priyanka Chopra wore an off-white dress and paired her look with a blue jacket. Her bold eye-make up totally complemented her look. The 34-year-old actress captioned one of her images as, "What an epic evening! #PreOscars."

A fanclub also shared Deepika and Priyanka's photo together:

Priyanka is now a regular at various Hollywood events. The Quantico stars has also received two People's Choice Awards. She also made an appearance at the Golden Globes Awards while Deepika was spotted at the after-party. This is Priyanka's second appearance at the Oscars. Last year, the she was one of the presenters.

Promoted
Listen to the latest songs, only on JioSaavn.com
Meanwhile, Mike Jagger tweeted that he wouldn't be attending the Oscars 2017. Priyanka had earlier announced that she will be attending the Academy Awards. She posted: "Change of plans! Oscars here we come. Mick Jagger LA LA Land." However, Mike wrote: "How odd, I read that I'm going to the Oscars with Priyanka Chopra. I shall not be going to the Oscars at all."

The 89th Academy Awards will be held at the Dolby Theatre in Hollywood, Los Angeles, on Sunday, February 26. The ceremony will take place on February 27 according to the Indian time. The Oscars 2017 will be hosted by Jimmy Kimmel. Oscar 2017 will begin from 8:30 pm EST and the red carpet coverage will begin at 5:30 pm EST. In India, viewers can watch the award ceremony live from 7 am.