Oscars 2017: 2 People Knew La La Land's Win Was A Mistake. Why Did It Take So Long To Correct? 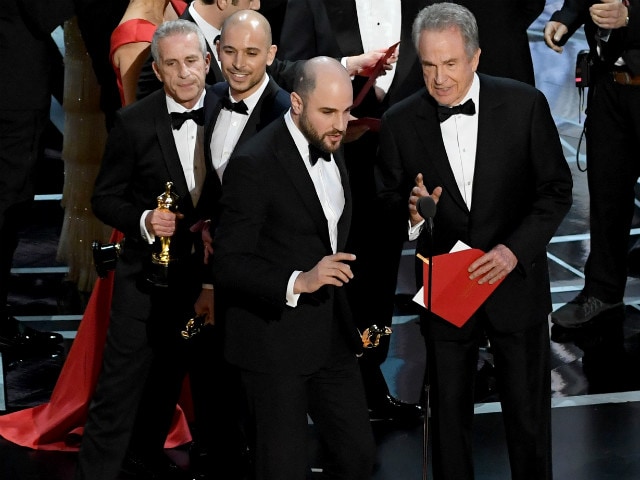 Los Angeles: At the climactic final moment of the 89th Academy Awards, when Faye Dunaway read the name of the film printed on the card in front of her - La La Land! - there were two people, standing on either side of the stage in the Dolby Theater, who knew immediately that the film she had just announced did not actually win the Oscar for best picture.

But no one else knew, not for nearly two full minutes. As the audience erupted into applause, the cast and crew of La La Land leaped to their feet and embraced.

Then they made their way to the stage. Then producer Jordan Horowitz delivered a touching thank-you speech. Then producer Marc Platt did the same. Finally, about one minute and fifty seconds after Dunaway declared the wrong winner, two people appeared onscreen - a man wearing a headset, and Martha Ruiz, one of the PricewaterhouseCoopers partners who oversees the Oscars ballot process. The man in the headset conferred with Horowitz and several others, as film producer Platt, apparently unaware of the drama behind him, wrapped up his comments. Amid the confusion, a third producer, Fred Berger, was reluctantly nudged to the mic, though he'd just been alerted to the mixup and gave a few stilted remarks.

Only then did anyone take action -- Horowitz, who grabbed the microphone and made the stunning announcement: "I'm sorry, no, there's been a mistake. Moonlight,' you guys won best picture. This is not a joke."

It wasn't a joke. But for the two people who are charged with overseeing the announcement of winners - a meticulous protocol that had been fine-tuned over 82 years and almost always executed flawlessly - it was something of a nightmare. Dunaway and fellow presenter Warren Beatty had somehow been handed the wrong envelope, one containing the winner for best actress, which had been awarded moments earlier to Emma Stone for her role in La La Land.

It was precisely the sort of screw-up that Ruiz and Brian Cullinan, partners at the professional services firm PricewaterhouseCoopers, have always worked to avoid. The two so-called Oscar ballot co-leaders oversee the vote-tallying process, identify the winners for each category, select the cards for the winners and seal them into their respective envelopes - but not before they memorize every winner in every category. At the ceremony, Ruiz and Cullinan carry matching briefcases, each filled with a full set of 24 envelopes with winning entries inside.

"Ideally, we like to have everything completed several days before the show. That last day is when Brian and I will start memorizing the winners of each category and start quizzing each other," Ruiz said in a Feb. 10 interview published by the academy's public relations arm. "It's that extra measure to make sure it really is only to our memory at that point, to make sure that everything's accurate."

That final measure follows dozens of rounds of checking and re-checking the results, Cullinan added in that same interview: "We'll have staff go back two and three times to make sure, and then Martha and I will review and recount to ensure there are no differences between what we have and they had."

During the show, Ruiz and Cullinan stand on opposite sides of the stage and hand each envelope to the presenters.

"It doesn't sound very complicated," Cullinan said, "but you have to make sure you're giving the presenter the right envelope."

Which somehow didn't happen Sunday night. In the aftermath of the mistake, PricewaterhouseCoopers issued an apology and said they would investigate what, exactly, went wrong.

But there is also the question of why, exactly, it took so long to correct an error that Ruiz and Cullinan should have recognized instantly. Certainly, it probably wouldn't be ideal for someone to sprint wildly onstage the moment Dunaway made her announcement; but it seemed particularly unfortunate that the La La Land team suffered the humiliation of delivering speeches for a prize they didn't win - and that the stunned cast and crew of Moonlight didn't have much chance to acknowledge their rightful victory.

But despite the debacle, Moonlight director Barry Jenkins was magnanimous about the snafu in the press room.

"I noticed the commotion that was happening, and I thought something strange had occurred. And then I'm sure everybody saw my face. But I was speechless when the result - that was awkward, because I've watched the Academy Awards, and I've never seen that happen before," he said. "And so it made a very special feeling even more special, but not in the way I expected."

Jenkins added: "The last 20 minutes of my life have been insane. I don't think my life could be changed any more dramatically than what happened in the last 20 or 30 minutes."

No one offered a reason for the confusion, he said.

After the ceremony, Horowitz - who was widely lauded for his generosity and grace in a decidedly surreal, intensely awkward moment - described the emotional whiplash of the moment to The Hollywood Reporter.

At first, "I was ecstatic, it was amazing. I thought we won an Oscar," he said. "Some guys in headsets started buzzing around. It became clear that was something wrong. They took the envelope I had. It said 'Emma Stone, La La Land' on it."

There was suddenly a frantic search for the correct best picture envelope, he added. "Nobody knew where it was. Then it appeared, they opened it next to me and it said Moonlight.'"