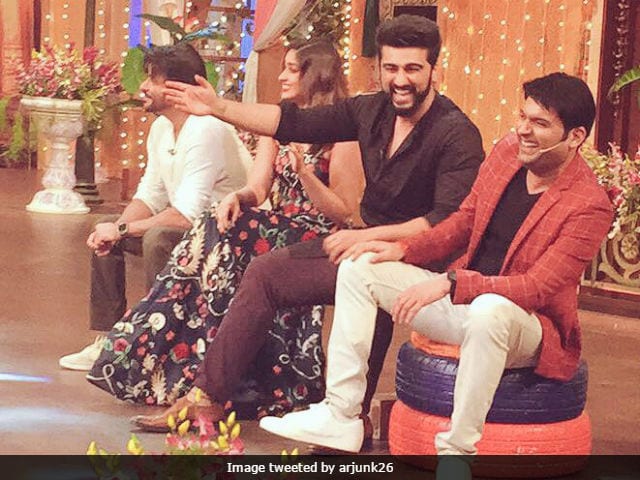 Cast of Mubarakan on the sets of The Kapil Sharma Show (Image courtesy: arjunk26)

New Delhi: Comedian Kapil Sharma finally welcomed the team of Mubarakan on The Kapil Sharma Show after two weeks of no shoot. Today, actors Anil Kapoor and Arjun Kapoor delighted everyone by sharing pictures from the sets of the show. "When it is with @KapilSharmaK9, it's bound to be a laugh riot! @arjunk26 @ileana_official #Mubarakan," Anil Kapoor tweeted. Last week, it was reported that Kapil Sharma kept the team of Mubarakan waiting for hours before cancelling the shoot. Later, Arjun Kapoor cleared the air in a tweet. The 32-year-old actor said that Kapil couldn't shoot for the show due to ill health.

The pictures shared by Anil Kapoor and Arjun are proof that the cast of Mubarakan had a great time filming The Kapil Sharma Show.

When it is with @KapilSharmaK9, it's bound to be a laugh riot! @arjunk26@ileana_official#Mubarakanpic.twitter.com/cbzBAzXLc8

The show that makes me smile no matter what...@KapilSharmaK9@kikusharda@bharti_lalli the entire cast n crew of #TKSS thank u guys big love pic.twitter.com/SkBKKWEUq1

Mubarakan, starring Anil Kapoor, Arjun Kapoor, Ileana D'Cruz and Athiya Shetty, is scheduled to release on July 28. Earlier, Shah Rukh Khan and Anushka Sharma left the sets of The Kapil Sharma Show without shooting for the episode. Hindustan Times reported that Kapil collapsed on the sets and was rushed to the hospital.

"Kapil had to shoot with actor Shah Rukh Khan for Jab Harry Met Sejal on Friday night but he fainted on the sets during the shoot. He is under a lot of stress because of the show and is doing everything possible to keep it on top of the TRP. This stress took a toll on him and the shoot had to get cancelled," Hindustan Times quoted a source as saying.

Promoted
Listen to the latest songs, only on JioSaavn.com
A source also told Hindustan Times that Kapil is stressed due to his rival Krushna Abhishek's The Drama Company that is being aired on the same channel. However, Kapil Sharma's colleague Kiku Sharda dismissed the reports. In an interview to BollywoodLife, Kiku Sharda said that his colleague is indeed unwell, he's not depressed and the show isn't going off air. "Kapil's absence due to his ill-health has fanned stupid speculations. I don't want to comment and fan all this further. We have started shooting for the coming weekend," Kiku told BollywoodLife.