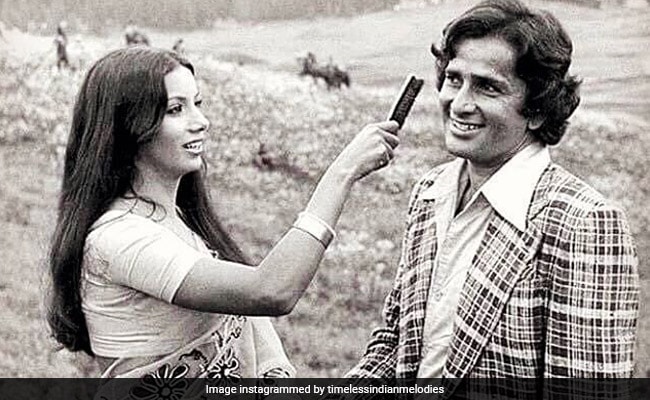 A throwback picture of Shabana and Shashi shared by a fan-page. (Image courtesy: timelessindianmelodies)

On Shashi Kapoor's birth anniversary, Shabana Azmi remembered the legend, with whom she shared screen space several times in the Seventies and Eighties, by describing him as "gorgeous" in a tweet. The actress, on Wednesday, was asked by a fan page, which celebrated Shashi Kapoor's birth anniversary by sharing a set of old photographs of him on their respective profile, to describe the actor in one word. Retweeting their post, Shabana replied: "Gorgeous." The album comprises portraits of the Deewar actor, one of which is also signed by him. Take a look at her tweet here:

Last year also, Shabana Azmi remembered Shashi Kapoor on his birth anniversary by sharing a heartfelt note for him on Twitter. She shared a photograph of him and wrote: "Shashiji ... We miss you.. your warmth, your generosity, your humanity... Today would have been your 81st birthday."

Shashiji .. we miss you.. your warmth your generosity your humanity .. Today would have been your 81st birthday .. pic.twitter.com/YR6ZldG1KT

Shashi Kapoor was born in 1938 to actor Prithviraj Kapoor. He was the younger brother of Raj and Shammi Kapoor. Shashi Kapoor started as a child actor in his brother Raj Kapoor's films Aag and Awaara. He went on to feature in hits such as Sharmilee, Namak Halaal and Pyar Kiye Jaa. Shashi Kapoor also appeared in several Merchant-Ivory films such as Heat And Dust and The Householder. His illustrious resume included Indian and international cinema.

Shashi Kapoor was confined to a wheelchair in the last years of his life. He died in December 2017. He was 79.