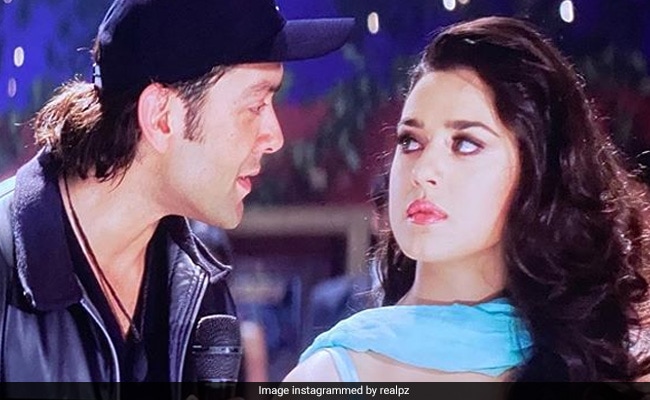 Preity Zinta is still very much of a desi girl at heart. Did you know she has a Bollywood movie night ritual reserved for Tuesdays? The 45-year-old actress, who is in isolation in her Los Angeles home with her mom and husband Gene Goodenough, shared a glimpse of the movie they watched this Tuesday on Instagram. Sharing a photo of the television screen featuring Preity and Bobby Deol from Soldier, the actress wrote: "Watching Soldier after forever with mom and hubby. Cuz Tuesday night is Hindi movie night and I cannot say no to mom and Gene. Miss ya, Bobby Deol."

Meanwhile, when in lockdown, Preity Zinta has also been brushing up her culinary skills. "Yesss! Finally learnt how to make Masala Dosa. It's incredible how we have not gone out for 16 days nor met anyone. Feels strange, but I'd rather be home safe than sorry. It's really nice to hang with mom and learn recipes of some of my favourite dishes. Trying to stay positive and productive while we stay in," she wrote in a post.

Yesss ! Finally learnt how to make Masala Dosa It's incredible how we have not gone out for 16 days nor met anyone. Feels strange, but I'd rather be home safe than sorry. Its really nice to hang with mom & learn recipes of some of my fav. Dishes. Trying to stay positive & productive while we stay in #day16 #quarantine #cooking #dosa #lockdown #stayhome #staysafe #ting

Preity has also been indulging in major champi sessions, all thanks to her mother.

Preity Zinta married Los Angeles-based Gene Goodenough in 2016 after which she shifted to the US. Preity shuttles between India and LA through the year. On the work front, Preity Zinta was last seen in the 2018 film Bhaiaji Superhit.