The duo worked together, earlier this year, for the promotional duties of Masaba Masaba 2, the second season of the fashion designer’s Netflix show 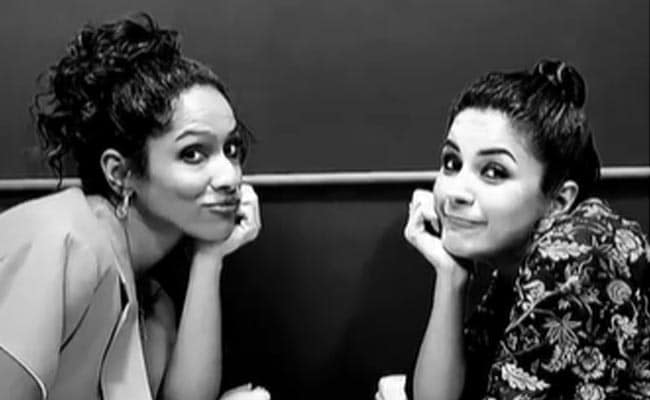 Hey Masaba Gupta, happy birthday. As the fashion designer turns 33 today, her family and friends flooded social media with adorable birthday wishes. One of the adorable greetings was from singer-actress Shehnaaz Gill. The duo worked together, earlier this year, for the promotional duties of Masaba Masaba 2, the second season of the fashion designer's Netflix show. Shehnaaz, on Wednesday, shared a BTS clip of themselves goofing around on the sets of their shoot. They look adorable together. While the birthday girl looks stunning in an orange printed dress along with a matching blazer, Shehnaaz is seen in a chic outfit – a black and white co-ord set.

Remember the time when Masaba Gupta collaborated with Shehnaaz Gill to promote the second season of her show Masaba Masaba? The duo, taking the meme game a notch above, created hilarious memes on topics like relationships and crush. In the video, Shehnaaz Gill is heard saying, “If the world mocks us, why should we care?” To this, Masaba Gupta adds, “We would make memes ourselves. Cooler and sicker.” The duo then go on to make ROFL memes. Watch the clip here:

On the work front, Masaba Gupta is the owner of the label House of Masaba. She has also launched a cosmetic line - Lovechild Beauty – under her label. She made her acting debut with Netflix's Masaba Masaba, which also stars her mother Neena Gupta.

Shehnaaz Gill, on the other hand, will next be seen in Salman Khan's Kisi Ka Bhai Kisi Ki Jaan. Her last project was the Punjabi film Honsla Rakh.

Priyanka Chopra Recalls When Malti Marie Was Intubated: "Didn't Know If She Would Make It"